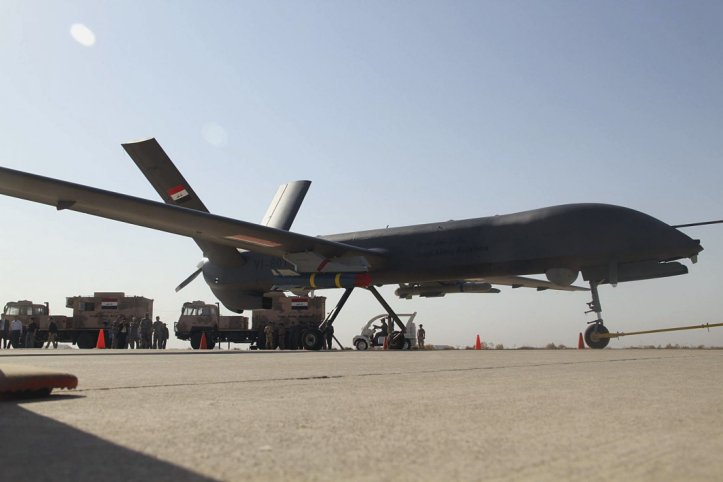 A photograph released by the Iraqi Ministry of Defence on 10 October 2015 of one of the Iraqi Army's CH-4 UAVs armed with what appear to be an AR-1 laser-guided missile and FT-9 guided bomb. (Iraqi MoD)

The report cited CJTF-OIR as saying that Iraq had acquired more than 10 CH-4s, but only one was fully mission capable because of maintenance problems.

The Iraqi Ministry of Defence unveiled armed CH-4B variants in October 2015 but did not state how many it had acquired. Jordan also acquired CH-4s but put them up for sale earlier this year for unspecified reasons.

The CH-4 is not the only problematic UAV type in Iraq’s inventory. The inspector general report cited CJTF-OIR as saying the fleet of more than 10 US-made Insitu ScanEagle UAVs flew only two sorties between 1 March and 30 June because of a “combination of Iraqi training in the United States, a lapse in maintenance contracts, and problems with signal interference”.

The US military announced in January 2014 that it was expediting the delivery of 10 operational ScanEagles to Iraq, as well as four non-operational ones to facilitate maintenance of the others. Insitu was awarded a USD7.8 million contract in August 2017 to provide another six ScanEagle systems to Iraq.

Iraq is struggling to maintain its airborne intelligence, surveillance, and reconnaissance (ISR) cap...