Chinese state-owned media revealed on 8 March what is described as a new, third-generation anti-tank guided missile (ATGM) with a top-attack capability meant for use by the People’s Liberation Army Ground Force (PLAGF). 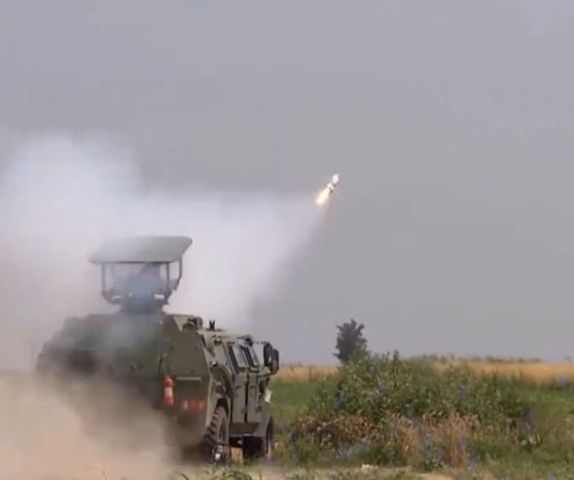 A screengrab from video footage released on 8 March showing what CCTV described as a new anti-tank guided missile. The weapon was launched from what appeared to be a modified CSK181 4×4 armoured vehicle. (CCTV)

Footage released by China Central Television’s (CCTV’s) Weihutang programme shows the ATGM being launched from what appears to be a modified CSK181 4×4 armoured vehicle. The launcher is retractable, with the footage showing one missile fitted to a rail, although more missiles could be carried based on the size of the launcher.

The weapon, the designation of which was not revealed, is larger in diameter than previous ATGMs, and “can destroy soft and hard targets, including modern main battle tanks”, according to CCTV.

It is unclear whether the displayed CSK181 was modified just for use as a testbed. CCTV said that the new ATGM system is expected to be mounted “on a variety of chassis”, including one for new infantry fighting vehicles.

No further details were provided by CCTV, including whether the ATGM is already in PLAGF service or still under development. That said, the state-owned Global Times newspaper reported on 12 March that the new weapon is “now being deployed” by the PLAGF.

This article, first published on 10 March, has been updated with new information.

Chinese state-owned media revealed on 8 March what is described as a new, third-generation anti-tank...

Chinese state-owned media have released an image suggesting that the Hongjian-12 (J-12) manportable ...

Chinese state-owned media revealed on 6 June that an artillery brigade under the People's Liberation...
Request Consultation