The UK transferred control of its Britten-Norman Defender AL2 surveillance aircraft and Islander AL1/CC2 surveillance and utility aircraft from the British Army Air Corps (AAC) to the Royal Air Force (RAF) on 1 April. 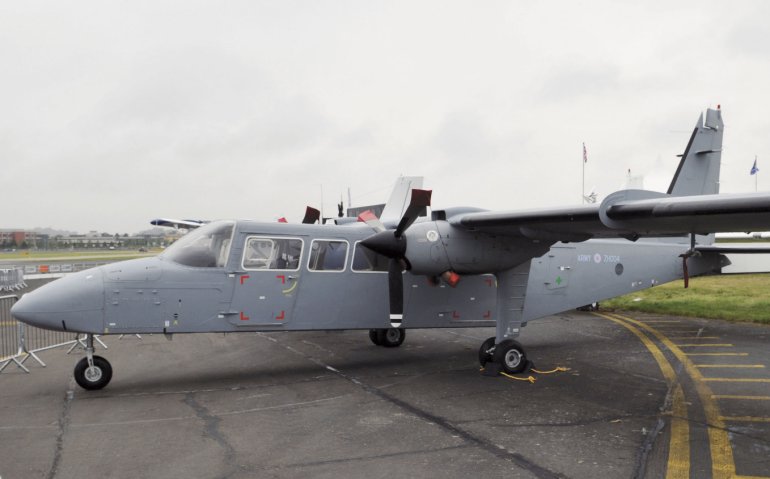 The Defender and Islander aircraft that had until 1 April provided the British Army with its Fixed-Wing Manned Aerial Surveillance capability have now been transferred to the Royal Air Force. (IHS Markit/Patrick Allen)

The Defenders and Islanders that had previously been under the authority of the Joint Helicopter Command (JHC) will now fall under the direction of the RAF’s No 1 Group.

As noted by the head of No 1 Group, Air Vice-Marshal Harv Smyth, the AAC’s 651 Squadron that fields the Fixed-Wing Manned Aerial Surveillance (FWMAS) capability has transferred to the RAF as a unit, while its personnel will transition over the next few years. “It will be operated in a joint fashion for a period as various postings out and in occur,” Smyth said.

While 651 Sqn is based at JHC Flying Station (JHC FS) Aldergrove in Northern Ireland, neither AVM Smyth nor the head of JHC, Rear-Admiral Jonathan Pentreath, noted any future change in the unit’s location.

The AAC’s 651 Sqn is a special forces support unit, so the Ministry of Defence (MoD) rarely comments on the unit or the Defender and Islander fixed-wing twin turboprops that it flies. This opacity extends to the precise number of aircraft in service, although Jane’s has previously quoted a 2016 UK Armed Forces Equipment and Formations report in which the MoD said it owned nine Defender AL2s, three Islander AL1s, and three Islanders CC2s, with eight, three, and one aircraft respectively in daily use. There were also a further three Islanders in long-term storage at RAF Shawbury in Shropshire.