The UK Ministry of Defence (MoD) has given the green light to the next phase of the European Common Radar System (ECRS) Mk 2 radar for the Royal Air Force’s (RAF) Typhoon multi-role fighter.

BAE Systems and Leonardo will share funding worth GBP317 million (USD421 million) for the development and integration of the ECRS Mk 2. Alongside standard radar search/track modes, the ECRS Mk 2 will also confer electronic warfare (EW) and electronic attack (EA) capabilities.

The new active electronically scanned-array (AESA) radar is initially planned for retrofit to 40 Tranche 3 Typhoons, with the option remaining for extension into Tranche 2 aircraft. The UK’s commitment to ECRS Mk 2 follows a similar commitment from Germany and Spain to deliver their own national requirements for an AESA radar.

Both BAE Systems and Leonardo are already working, as part of a four-nation development programme, alongside Eurofighter consortium partners in Germany, Spain and Italy on a baseline version of the Captor-E AESA radar. However, the two companies say that the ECRS Mk 2 “is a completely new approach designed to meet the operational needs of the RAF and future export customers”.

The key differentiators for the ECRS Mk 2 are a new high-power multi-function array, featuring significantly more transmit/receive elements than similar fighter radars, and a new open-architecture radar ‘back end’. The new array will enable the simultaneous operation of EW and wideband EA functionality alongside traditional air-to-air and air-to-surface radar modes. 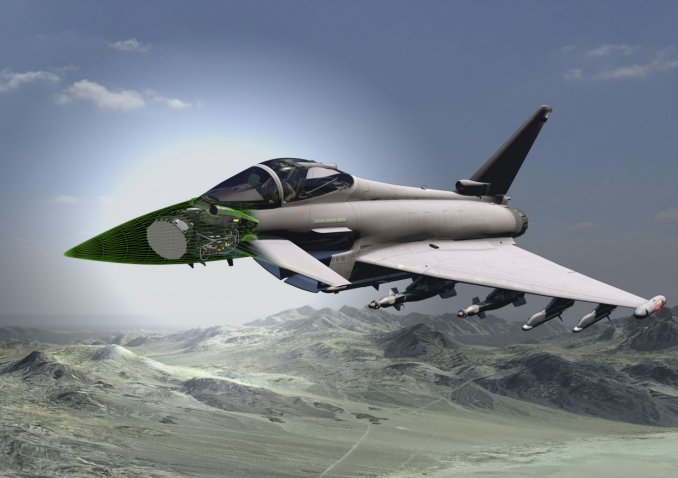 The UK Ministry of Defence (MoD) has given the green light to the next phase of the European Common ...