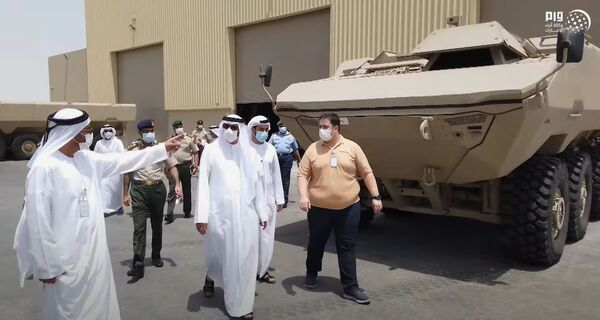 The WAM state news agency reported Minister of State for Defence Affairs Mohammed bin Ahmed al-Bowardi's visit to Calidus on 29 July, saying he was briefed on the company's vehicles and their production process.

It released a video showing Bowardi inspecting a manufacturing facility where at least two completed Wahashs without turrets and another four uncompleted hulls could be seen in addition to two of the models that were displayed during the IDEX show held in February. One of the display models is fitted with the turret used by the UAE's BMP-3 tracked IFVs, the other with a Serbian-supplied 105 mm gun turret.

The Wahash was unveiled at IDEX 2019, prompting speculation it was a new contender for the UAE Armed Force's 8×8 IFV requirement even though this appeared to have been filled two years earlier when Al-Jasour, which is now part of the Edge group, received an order for 400 Rabdans, a vehicle based on the Arma 8×8 made by Turkey's Otokar.

While no Wahash orders have been announced, the Finnish government approved the export of Sisu axles and Katsa transmissions for several hundred vehicles to Calidus in March 2020.

A visit by the United Arab Emirates' (UAE's) top defence official to Calidus indicated the company's...