Turkey’s ULAQ unmanned surface vehicle (USV) prototype has been put through its first live-firing trial on 26 and 27 May, its developers have announced.

The ULAQ is an armed USV being developed under a joint venture between Ares Shipyard and defence electronics company Meteksan. 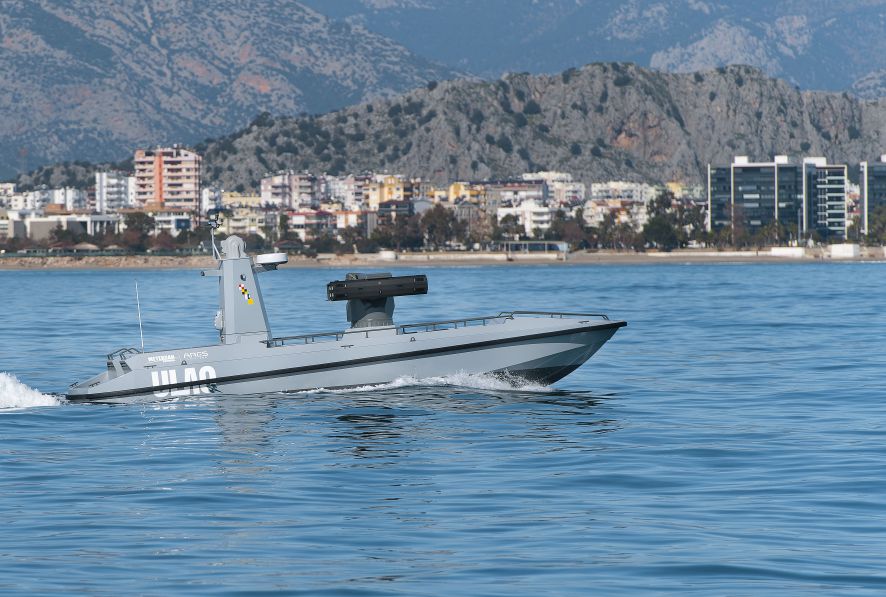 The ULAQ USV prototype launched two Cirit missiles at a static target during a live-fire demonstration on 27 May. (Ares Shipyard/Meteksan)

The ULAQ programme was first announced to the public in October 2020, with development work being funded by both companies since 2018. The principal design studies and concept definition was completed in 2018 and 2019 respectively, with prototype construction starting in June 2020.

The prototype was launched at Ares Shipyard’s facility in Antalya in February and has been put through extensive at-sea testing.

The live-fire trials occurred off the coast of Antalya with the main test conducted on 27 May. The ULAQ prototype fired two Cirit laser-guided 70 mm missiles with live warheads – which have a maximum stated range of 8 km – to engage a stationary target placed on a small island at a distance of 4 km. Both missiles were seen hitting the target successfully in video footage released by the companies.

The prototype was controlled from a van-based mobile command station, with the test witnessed by representatives from the Turkish Navy, Turkish Coast Guard, and the Qatari Armed Forces, as well as senior officials from the Presidency of Defence Industries (Savunma Sanayi Başkanlığı: SSB) and local industry.

The live-firing demonstration is a milestone for the ULAQ programme, which is expected to introduce further variants designed to undertake missions including intelligence, surveillance, and reconnaissance (ISR), electronic warfare (EW), mine warfare, anti-surface warfare (ASuW), anti-submarine warfare (ASW), and firefighting.