The Turkish geological survey vessel Oruç Reis continued to chart an area in the eastern Mediterranean claimed by both Greece and Turkey following the 12 August collision of frigates from the two countries. AIS tracking of the survey vessel showed it continuing its movement pattern on 13–20 August. 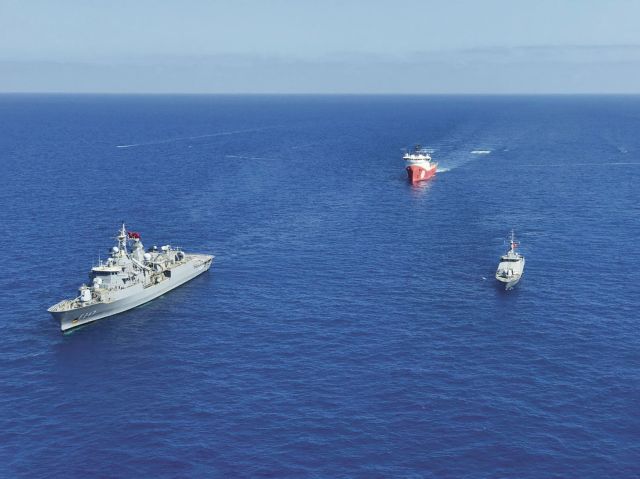 The Hellenic Navy frigate Limnos collided with the Turkish frigate TCG Kemalreis on 12 August, but both ships continued to operate afterwards. The Turkish Ministry of National Defence (MND) tweeted photos of Kemalreis participating in Operation ‘Mediterranean Shield’ in the Mediterranean with Turkish Cypriot coast guard units and escorting the Barbaros Hayrettin survey vessel on 16 August.

Greek Prime Minister Kyriakos Mitsotakis’s national security advisor, Rear Admiral Alexandros Diakopoulos, resigned on 19 August after he pointed out the day before that the Oruç Reis was continuing its research activities.

Turkey issued another international maritime safety message (Navtex) on 16 August that its Yavuz drilling vessel would explore energy resources off Cyprus from 18 August to 15 September. This followed a 10 August Navtex announcing that the Oruç Reis and two auxiliary ships would conduct exploratory drilling in the area on 10–23 August.

Turkish President Recep Tayyip Erdoğan called during a speech on 19 August for a peaceful solution to the crisis through dialogue. However, he said Turkey’s oil exploration activities were fully in line with both international maritime law and established conventions.

The Turkish geological survey vessel Oruç Reis continued to chart an area in the eastern Mediterrane...