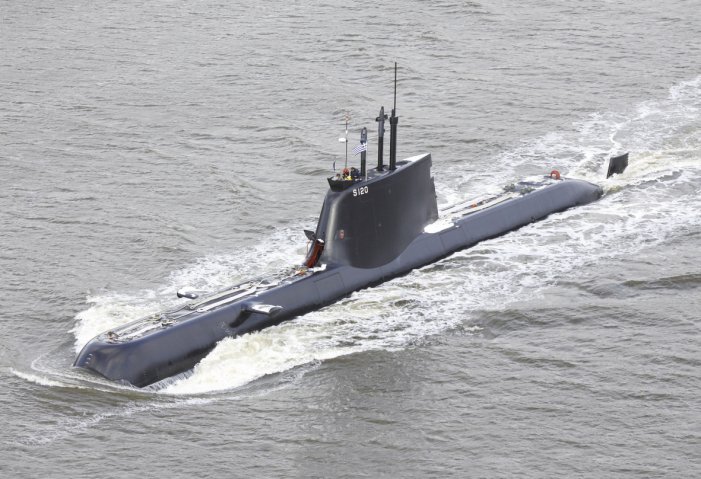 TKMS is understood to be offering a Type 214 variant that is similar to the Hellenic Navy’s Papanikolis-class boats. (Michael Nitz/Naval Press Service)

The delegation, which is headed by a TKMS Senior Vice President that is responsible for the eastern region, completed their last day of quarantine procedures on 2 March, and began discussions with representatives from the Indonesian Ministry of State Owned Enterprises and the Ministry of Defence (MoD) a day later, a source close to the ongoing discussions has confirmed with Janes.

Among matters that are being discussed include the TNI-AL’s operational requirements, work-share arrangements that can be offered by TKMS to the local shipbuilding industry, infrastructure support, and financing terms should a procurement programme for the boats materialise.

Besides Jakarta, the TKMS delegation will also be visiting PT PAL’s submarine production facilities in Surabaya.

The Type 214 SSK from TKMS is one of several programmes that have been recently included in the MoD’s ‘Blue Book’– a list of proposed procurements that either have, or are being escalated to the Indonesian Ministry of National Development Planning (Kementerian Perencanaan Pembangunan Nasional: BAPPENAS) for funding approval.

The escalation, which outlines a requirement for up to four Type 214 boats, was disclosed in the 2021 edition of a yearly publication for Indonesian Armed Forces (Tentara Nasional Indonesia: TNI) and MoD staff known as the ‘Leadership Assembly’. The publication features opening remarks from TNI Chief Air Vice Marshal Hadi Tjahjanto and Defence Minister Prabowo Subianto.

A delegation of representatives from German shipbuilder Thyssen-Krupp Marine Systems (TKMS) has arri...