Meanwhile, it has emerged that the first improved Tuo Chiang-class corvette on order for the RoCN, TaChiang (pennant number 619), is expected to enter service in August after being launched on 15 December 2020 at the facilities of Taiwan's Lungteh Shipbuilding in Suao, southern Yilan County. 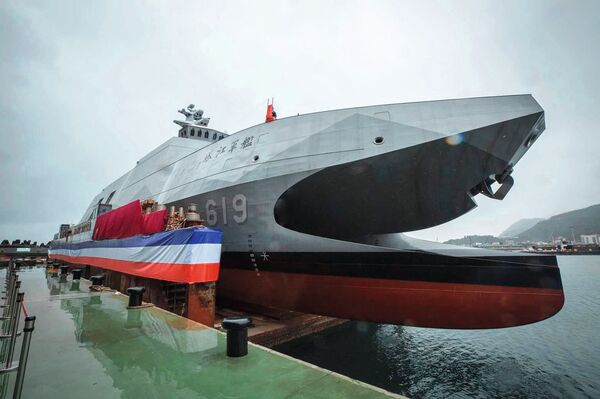 The first improved Tuo Chiang-class fast missile corvette on order for the RoCN, Ta Chiang (seen here during its launch ceremony in December 2020), is expected to be armed with the new 'Sea Sword II' air-defence missile. (Via Tsai Ing-wen's Twitter account)

Taiwanese President Tsai Ing-wen, who presided over the launch ceremony, said at the time that Taipei aims to build a total of six of these improved ships by 2023, with up to five additional ones expected to be built thereafter.

Developed under the Hsun Hai programme, the Tuo Jiang-class vessels are designed to provide the RoCN with a high-end, asymmetric means to defeat amphibious landing and capital ships.

The Republic of China Navy (RoCN) has announced that it recently completed trials and evaluations of...