Delivered to the Republic of Korea Army, Navy, and Air Force for testing, the “radar-linked anti-drone integrated solution” is stated to be capable of detecting micro UAVs with a radar cross section (RCS) of 0.01 m² out to a distance of 8 km, after having detected during a preliminary test a DJI Phantom 4 Pro that has this RCS. The UAV defeat mechanism used by the system is jamming-based and is mainly intended to protect military facilities from small UAVs. 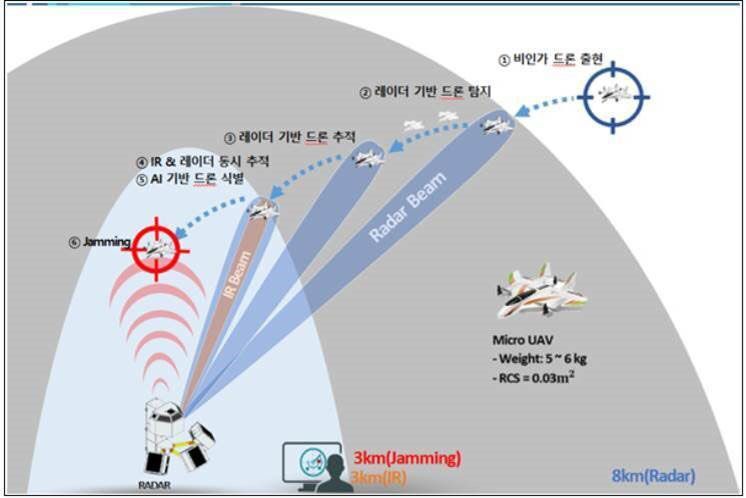 South Korea's DAPA said that the country's military will a conduct six-month trial of a new, locally developed counter-UAV system from 22 June. (DAPA)

DAPA noted that the growing military use of UAVs and the increasing threat posed by small UAVs to critical infrastructure were the key drivers behind the development of this new detection and jamming system.

The agency pointed out that the counter-UAV solution only uses indigenously developed technologies. For instance, its active electronically scanned-array (AESA) radar was developed by a local start-up company affiliated with the Daegu Gyeongbuk Institute of Science and Technology (DGIST). The radar was then integrated with the jamming system.

According to Yonhap News Agency, the counter-UAV system was developed under a KRW4.84 billion (USD4.3 million) deal awarded in November 2020 through a fast-track procurement process, and underwent a six-month period of production and inspection.

The South Korean military will conduct a six-month trial of a new, locally developed radar-linked sy...