South Korea has for the first time tested a locally developed submarine-launched ballistic missile (SLBM) from an underwater barge as the Republic of Korea Navy (RoKN) prepares to induct its first SLBM-capable Dosan An Chang-ho (KSS-III)-class submarine in the near future, according to local news channel YTN.

Few details were provided about the trial, but the Yonhap News Agency quoted unnamed analysts as saying that it appears to have been an underwater ejection test of the missile from the launch tube. The tested weapon is believed to be based on South Korea's 500 km-range Hyeonmu-2B (also spelled Hyunmoo-2B) ballistic missile.

The underwater test comes after Yonhap quoted an unnamed military source in January as saying that ejection tests of the missile conducted on land – presumably at the Agency for Defense Development's (ADD's) Anheung test site in Taean County – had been completed in 2020, adding that underwater test launches would follow in 2021.

The missiles, which are to be fitted with conventional warheads, are expected to be deployed with 3,000 tonne-class or larger submarines such as the KSS-III (also spelled KSS-3) boats. At the International Maritime Defense Industry Exhibition (MADEX) 2019 in Busan, South Korean shipbuilder Daewoo Shipbuilding & Marine Engineering (DSME) displayed a model of the KSS III class, confirming that these indigenously developed attack submarines have been designed with a capability to launch SLBMs.

According to YTN, first-of-class Dosan An Chang-ho (SS 083), which is equipped with an air-independent propulsion (AIP) system, could be handed over to the RoKN later this month following the successful completion of tests of the boat's torpedo decoy system and vertical launch system (VLS). 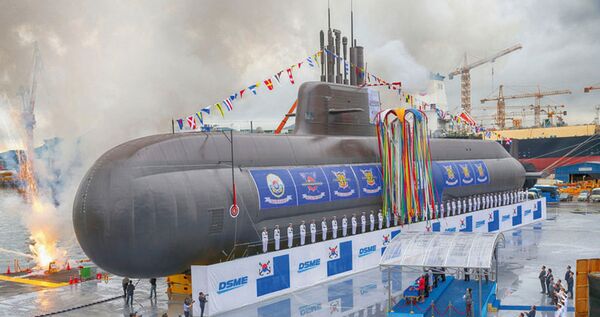