The second and final Supply-class auxiliary oiler replenishment (AOR) ship on order for the Royal Australian Navy (RAN) has arrived in Australia after having left the facilities of shipbuilder Navantia in northwest Spain on 20 May.

The RAN announced via Twitter that Stalwart (with pennant number A304) arrived at Fleet Base West – its future homeport in Western Australia – on 22 June.

Launched on 30 August 2019 the 173.9 m-long vessel will now undergo a final fit-out “where the installation and testing of the combat and communications systems, as well as some logistics areas, will be completed by Australian industry”, according to Navantia. 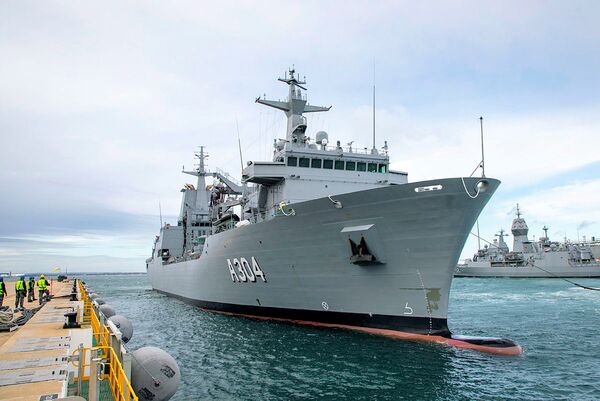 Stalwart , the second Supply-class AOR on order for the RAN, arrived in Australia on 22 June after having left the facilities of shipbuilder Navantia in northwest Spain on 20 May. (Royal Australian Navy)

Stalwart is expected to be handed over to the Commonwealth of Australia on 31 August and enter RAN service later this year, replacing supply ship HMAS Sirius .

Both Stalwart and first-of-class HMAS Supply , which was commissioned on 10 April at Fleet Base East in Sydney, are based on the Spanish Navy's Cantabria-class AORs. The Australian ships are part of an AUD642 million (USD481 million) contract signed with Navantia in May 2016 under Canberra's Project Sea 1654 Phase 3 Maritime Operational Support Capability programme.

The second and final Supply-class auxiliary oiler replenishment (AOR) ship on order for the Royal Au...