Saudi Arabia’s air defences appear to be coping better with long-range attacks on the kingdom, although they have yet to face a threat as challenging as the 14 September 2019 oil facilities attack. 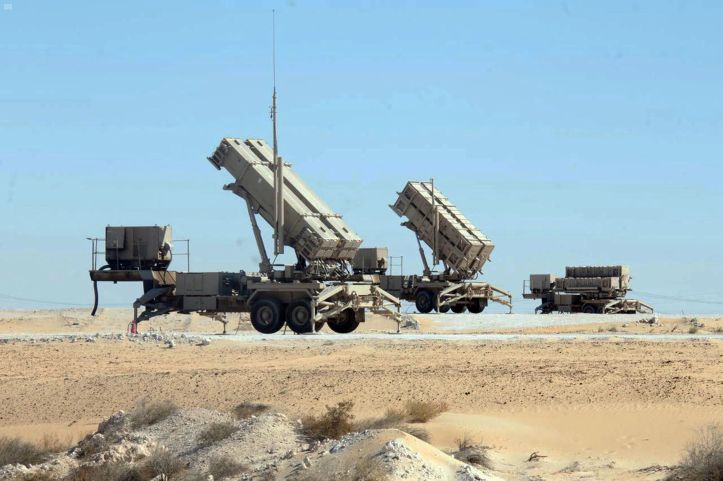 Saudi Patriot launchers, one with PAC-3 missiles, the others with larger PAC-2 missiles, during Exercise ‘Ramah al-Nasr-1’ that was held in the Eastern Province in January-February. (Saudi Press Agency)

The latest attack took place on 7 March, when the Yemeni group Ansar Allah, popularly known as the Houthis, said it launched a Zulfiqar ballistic missile and ten Samad-3 long-range unmanned aerial vehicles (UAVs) at as Tanura, the world’s largest oil export terminal, and military targets in the nearby Dammam area on Saudi Arabia’s Gulf coast.

The Saudi Ministry of Energy confirmed Ras Tanura had been attacked with a UAV that approached from the sea, but no damage was done, while remnants of a ballistic missile came down in the Aramco oil company’s residential neighbourhood in Dhahran, 37 km to the south, causing no casualties.

Saudi military spokesman Brigadier Gen Turki al-Maliki said both the bomb-carrying UAV and ballistic missile were shot down before they reached their targets.

This was the longest-range ballistic missile attack that has been confirmed to have come from Yemen to date. Ansar Allah claimed it targeted Dammam with a Burkan-3 ballistic missile on 1 August 2019, which would require a range of around 1,200 km, but there has been no subsequent corroboration.

Similarly, Ansar Allah said it launched a Zulfiqar ballistic missile and nine Samad-3 long-range UAVs at Riyadh on 28 February. Brig Gen Maliki said a ballistic missile was intercepted before it hit Riyadh and did not report a UAV attack on the capital.

Saudi Arabia’s air defences appear to be coping better with long-range attacks on the kingdom, altho...

Saudi Arabian Military Industries (SAMI) will continue to target acquisitions of companies in the Ki...