Sweden’s Saab provided an outline of a significant package as part of its bid for Finland’s HX fighter procurement programme on 28 August, including the development of a new lightweight air-launched decoy missile.

As part of the company’s offering for the HX programme, an in-country development and sustainment centre will be established to provide a variety of work including parts production and the assembly of engines and aircraft in Finland through a support and maintenance, repair, and overhaul facility. The company is currently engaged in supporting 10 research projects on microwave technology in Finland, with more than 100 industrial participation programmes agreed in support of the company’s HX bid. 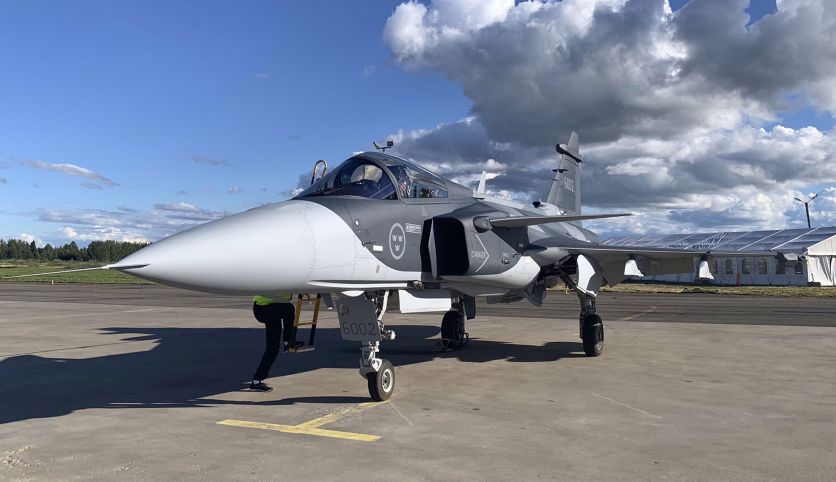 Saab’s offering of the Gripen E, seen here at the Kauhava Air Show, is seeing a broad-based industrial and security package being offered to Finland. (Saab AB/Twitter)

“This presence will be a very good base to support and sustain the Gripen and GlobalEye in operation, ensuring security of supply,” Micael Johannson, President and CEO of Saab, said.

Other research programmes currently supported by Saab in Finland include those for sensors and artificial intelligence.

The new air-launched decoy missile system, which was revealed for the first time during the press briefing, has benefited from substantial development work by the Saab Technology Centre in Tampere, Finland.

“Here we are combining the knowledge, long-term, in Sweden and in Finland, in microwave electronics,” HX programme campaign director for Saab Magnus Skogberg said. Development of the decoy missile will also support an expansion of the facility in Tampere.

Chief of Operations for the Swedish Air Force Colonel Carl-Fredrik Edström said that a Finnish acquisition of the Gripen and GlobalEye will create new possibilities for the two air forces.