The Rwanda Defence Force (RDF) has begun deploying a 1,000-strong joint force of soldiers and police to Mozambique to help suppress the insurgency in the northern Cabo Delgado province, the Rwandan Ministry of Defence announced on 10 July. 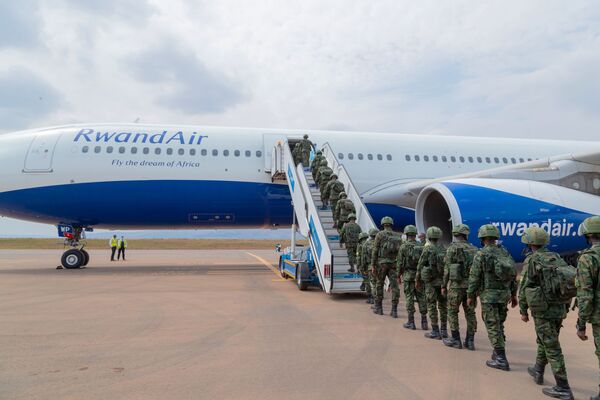 Rwandan troops embark on an airliner destined for Mozambique at Kigali International Airport on 10 July. (Rwandan Ministry of Defence)

“The Rwandan contingent will support efforts to restore Mozambican state authority by conducting combat and security operations, as well as stabilisation and security sector reform,” it said. “This deployment is based on the good bilateral relations between the Republic of Rwanda and the Republic of Mozambique following the signing of several agreements between the two countries in 2018.”

Journalists were invited to see a contingent of troops and police embarking on a RwandAir airliner at Kigali International Airport.

In an interview at the airport, RDF spokesperson Colonel Ronald Rwivanga said this was one of the last batches to leave. “The operation is not time specific, it is mission specific, so we will complete our job first and then determine when to leave,” he added.

Moussa Faki Mahamat, chairperson of the African Union Commission, welcomed the move as “a strong and concrete act of African solidarity to support a fellow member state fight terrorism and insecurity”.

This is the second deployment of Rwandan troops outside international peacekeeping operations in less than a year. It deployed a battalion to the Central African Republic in December 2020, saying this was to protect the personnel it has serving with the UN peacekeeping mission in the country and help secure the elections later that month. The Rwandan troops subsequently helped government forces push back a rebel offensive that coincided with the elections.

The Rwanda Defence Force (RDF) has begun deploying a 1,000-strong joint force of soldiers and police...