The Palantin electronic warfare (EW) system has made its training debut with a Russian battalion tactical group during an exercise near Voronezh, the Western Military District (WMD) press service announced on its website on 17 September. 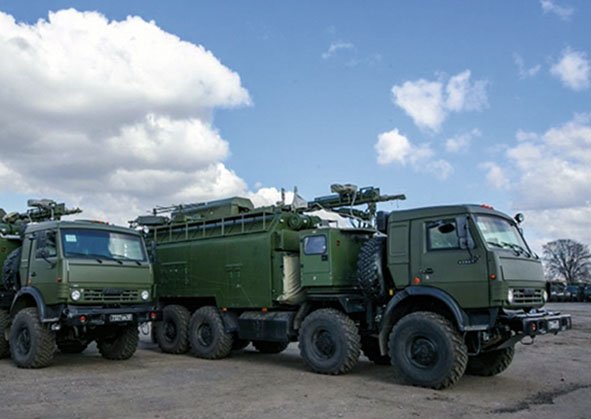 The Palantin EW system during a rehearsal for the 9 May 2018 Victory Day parade in Voronezh. (Russian MoD)

The system was used to “suppress enemy radio communication and electronic intelligence systems in a 1,000 km wide swathe”, the WMD states. “The capabilities of the equipment make it possible to blind the enemy in the short-wave and ultra-short-wave ranges, as well as to deprive it of cellular communications.”

The Russian Ministry of Defence (MoD) said on its website on 12 March that the system can be used to discretely target radio frequency objects, conduct bandwidth and specific frequency jamming, and detect opposing forms of EW.

Palantin can also be used to create a system-of-systems by combining various EW and electronic reconnaissance systems into a single co-ordinated network to enhance efficiency, the MoD explained.

Palantin, which translates into either ‘shoulder cloak’ or ‘stole’, entered service with the WMD in April 2019 and was originally scheduled to participate in an exercise in July, the RIA Novosti news agency reported on 27 June.

TV Zvezda reported on 5 May that, once Palantin is combined with existing EW systems, it would be capable of impeding the use of precision-guided munitions by preventing the accurate location of potential targets and information dissemination.

The Palantin electronic warfare (EW) system has made its training debut with a Russian battalion tac...