The Russian Navy’s Amur-class repair ship PM-138 was photographed in Port Sudan on 2 May, continuing a series of recent visits after Khartoum reportedly halted work on a Russian naval base on its Red Sea coast. 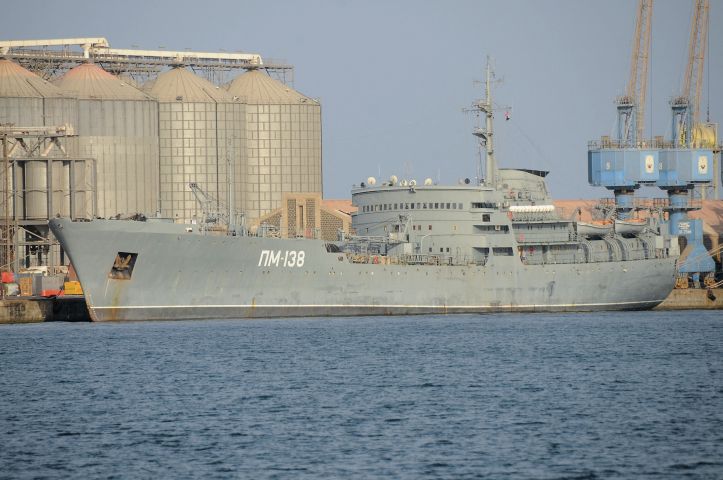 The Russian Amur-class repair ship PM-138 in Port Sudan on 2 May. (Ibrahim Ishaq/AFP via Getty Images)

Russian repair ships typically accompany flotillas on extended deployments, but an Amur class vessel was the Russian Navy’s primary presence at the Syrian port of Tartus until the facility was developed into a more significant base after Moscow began its military intervention in 2015.

Sudanese sources reported that PM-138 is accompanying the Vishnya-class intelligence ship Vassily Tatischev and would remain in Port Sudan for around 48 hours.

A Vishnya class vessel was photographed in Port Sudan on 27 April. That followed a visit by the intelligence ship Ivan Khurs on 10 April, the frigate Stoikiy on 18 March, and the frigate Admiral Grigorovich from 28 February to 1 March. The latter’s visit overlapped with that of the US Navy destroyer USS Winston S Churchill.

Al-Arabiya TV reported on 28 April that Khartoum has suspended the agreement that allows Russia to set up a naval logistics facility at the main Sudanese naval base, which is north of the commercial port were the Russian naval vessels are currently docking, until it has been approved by the Sudanese legislature.

The Arabic newspaper Al-Sharq al-Awsat reported that the commander of Sudan’s Red Sea Military Region had been ordered to prevent any further work on what it identified as the ‘Flamingo’ base, where 70 Russian personnel reportedly arrived with equipment that included radars and missile launchers earlier in April.

The Russian Navy’s Amur-class repair ship PM-138 was photographed in Port Sudan on 2 May, continuing...

The US Navy Destroyer USS Winston S Churchill (DDG 81) docked in Port Sudan on 1 March, where it joi...

Re-evaluation is needed of the financial arrangements and leasing conditions for the planned Russian...