The Dutch Ministry of Defence (MoD) has accused Russia of flying aircraft dangerously close to and low above the Royal Netherlands Navy's (RNLN's) Evertsen air defence and command frigate (LCF) in the Black Sea on 24 June. 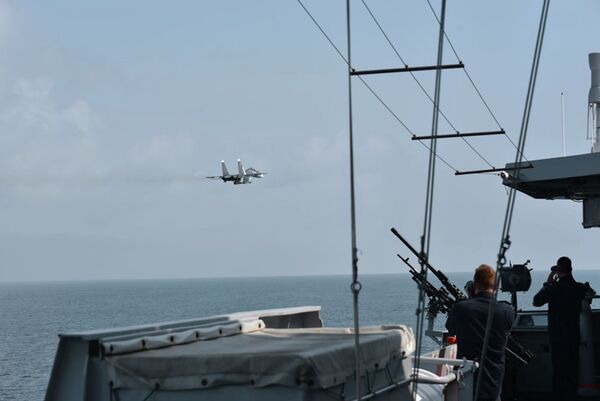 Russian Su-30SM multirole fighter carrying what appears to be a Kh-31 anti-ship missile flying by the RNLN LCF frigate Evertsen in the Black Sea on 24 June. (Dutch MoD)

The ministry reported on its website on 29 June that the aircraft harassed the frigate between 15:30 and 20:30 local time, illustrating the story with photos taken from Evertsen of Russian Su-30SM multirole fighters, including one flying alongside it carrying what appears to be a Kh-31 anti-ship missile. The Dutch MoD said the aircraft were armed with bombs and air-to-surface missiles and that Evertsen was subject to jamming.

The ministry called the Russian actions a violation of the right to the free use of the sea, citing the 1972 US-Soviet Incidents at Sea Agreement.

Evertsen commander Lieutenant Captain George Pastoor said, “ Evertsen sailed on the open sea in international waters. There was no reason whatsoever for these aggressive actions. Despite this, the mock attacks continued for several hours. It was irresponsible and unsafe behaviour at sea.”

Dutch Minister of Defence Ank Bijleveld-Schouten said, “ Evertsen has every right to sail there. There is no justification whatsoever for this kind of aggressive action, which also unnecessarily increases the risk of accidents. The Netherlands will address Russia about this.”

The Dutch Ministry of Defence (MoD) has accused Russia of flying aircraft dangerously close to and l...