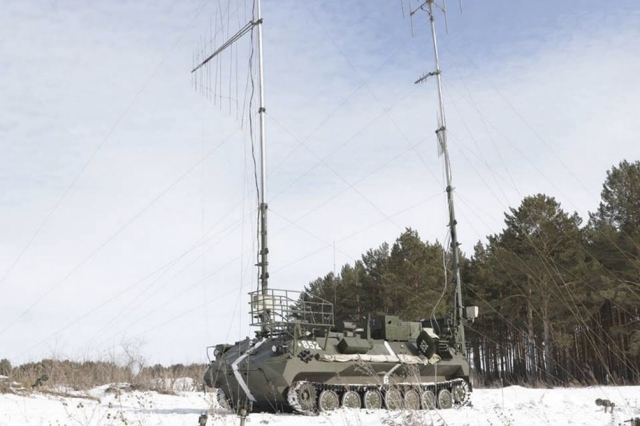 The R-330BMV vehicle is one of the elements of the Borisoglebsk-2 EW system. (Russian MoD)

The tactics used focused on the simultaneous deployment of the Krasukha, Zhitel, and Borisoglebsk ground-based EW systems. Each system is designed to target a different element of the electromagnetic spectrum.

The experimental exercise followed a sequence similar to a conventional air defence engagement. The RB-301B Borisoglebsk-2 system, which is based on the tracked MT-LB, was used to conduct reconnaissance of ground and airborne radio communications and, once targets had been identified, conducted interference.

The next system used was Krasukha, which consists of three vehicles based on the Kamaz-6350 truck and can be used to jam or suppress airborne radars as well as the radio control channels of UAVs.

The exact Krasukha variant used is not known but the Krasukha-2 is intended to jam airborne warning and control systems (AWACSs) at ranges of up to 250 km. The Krasukha-2 is also able to jam other airborne radars, such as radar guided missiles.

The truck-based R-330Zh Zhitel system was then used to interfere with satellite communications equipment, as well as navigation systems and mobile phones within a 30 km radius.