Three Tupolev Tu-22M3 ‘Backfire' bombers landed at Humaymim airbase in Syria for the first time on 25 May, the Russian Ministry of Defence (MoD) announced on the same day. 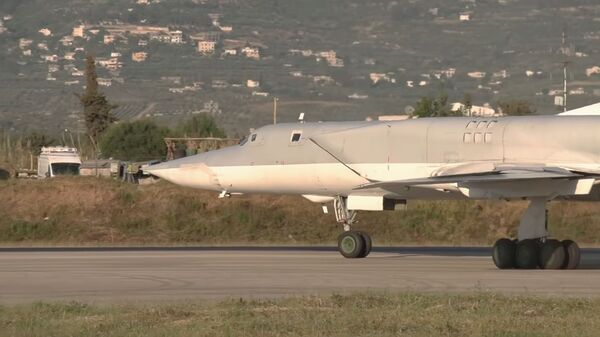 It released a video of the supersonic swing-wing bombers touching down at the airbase and said they would return to Russia after completing an unspecified period of training.

“This is the first time that aircraft of this type are based at the Humaymim airfield,” it said. “Crews of the long-range bombers will acquire practical skills in training tasks in new geographical areas during flights in the airspace over the Mediterranean Sea.”

The deployment was made possible because of a recent renovation of Humaymim's second runway and the installation of new lighting, signalling, and radio equipment, the MoD said. The runway has also been extended, it added.

Satellite imagery shows the western runway, which was marked as closed in early 2016, has been resurfaced, with new markings appearing in early May. It was also extended from 2,000 m to 3,010 m with longer safety areas at both ends. In contrast, the marked area on the eastern runway is 2,500 m long, although the paving continues another 300 m to the south.

The reintroduction of a second runway ensures the Russians will be able to continue to operate aircraft if one is taken out of service and should also enable them to increase their sortie rate if needed.

Three Tupolev Tu-22M3 ‘Backfire' bombers landed at Humaymim airbase in Syria for the first time on 2...