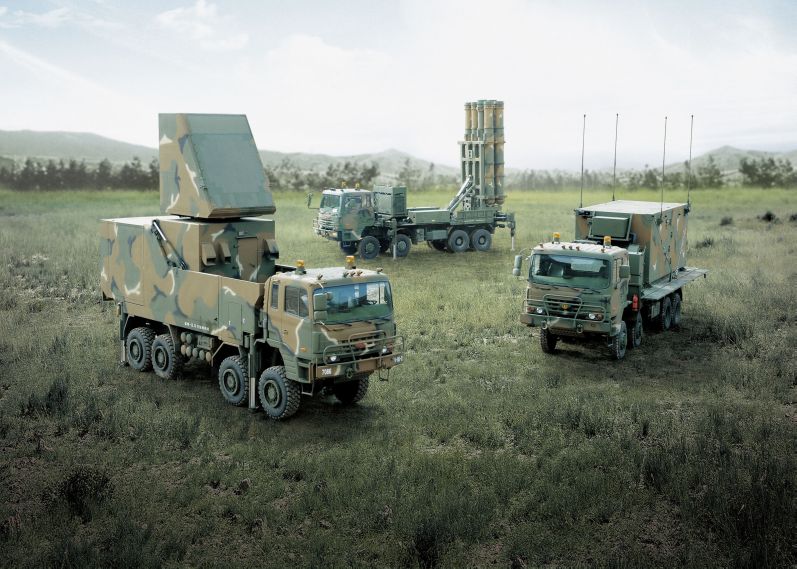 DAPA announced on 26 November that the RoKAF has received its first battery of the Cheongung air-defence system. A Cheongung SAM battery typically consists of a command-and-control centre, a multifunction radar, and four transporter-erector-launchers – all of which are mounted on separate 8×8 trucks. (DAPA)

The agency said the first of a planned seven batteries of the self-propelled, hit-to-kill (HTK) interceptor system, which has a stated maximum range of 40 km and is intended to replace the RoKAF’s MIM-23 HAWK (locally known as Cheolmae) SAM systems, was handed over to the service in November.

Development of the system, which is an improved version of the Cheongung I, began in 2012. The improved variant is designed to engage not only incoming enemy aircraft but also ballistic missile targets at an altitude of about 20 km.

The Cheongung II was rated fit for combat operations after meeting all the requirements at tests conducted in early June 2017. The move marked the completion of the development of the system’s improved HTK missile, which was led by the country’s Agency for Defense Development in co-operation with South Korean companies such as LIG Nex1. The upgraded missile is believed to be capable of reaching a speed of Mach 5.

The Republic of Korea Air Force (RoKAF) has received its first battery of the locally developed Cheo...