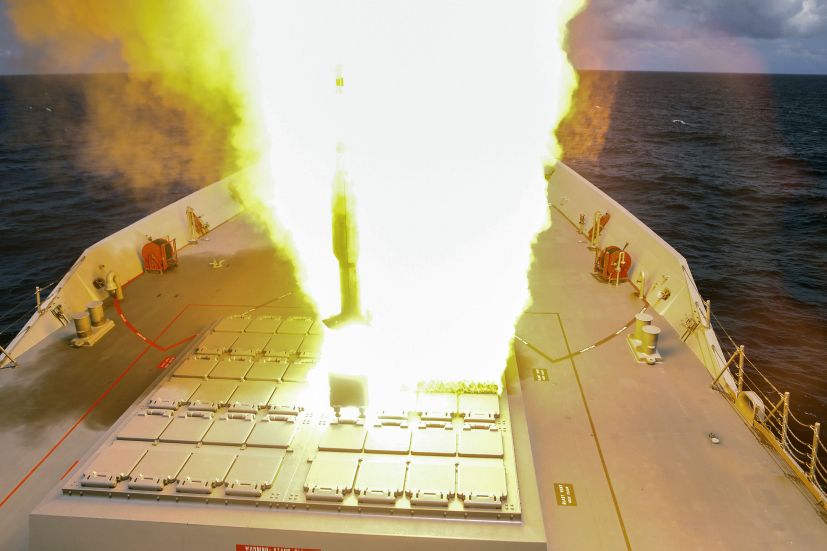 HMAS Hobart firing the SM-2 at RIMPAC 2020. (Commonwealth of Australia)

The firing was conducted at the Pacific Missile Range Facility off Hawaii, alongside vessels from the US Navy (USN) and the Royal Canadian Navy (RCN), said the RAN on 27 August via its official media, Navy Daily.

HMAS Hobart is in waters off Hawaii for the USN-hosted ‘RIMPAC 2020’ series of multilateral naval exercises, which is being held from 17 to 30 August. The drills this year focus solely on warfighting in the maritime domain.

Firing of the SM-2 standard missile proves that Hobart is ready to fight at sea as part of a joint force, said the ship’s commanding officer, Commander Ryan Gaskin.

“RIMPAC provides [the RAN] with a unique training opportunity to strengthen international maritime partnerships, enhance interoperability, and improve our readiness for a wide range of potential operations”, he added.

Hobart is equipped with a 48-cell Mk 41 vertical launching system (VLS) that deploys the SM-2, which features anti-air warfare and limited anti-surface warfare capabilities. The weapon has a range of 90 n miles and can reach altitudes of up to 65,000 ft.

The VLS can also launch the Raytheon RIM-162B Evolved SeaSparrow Missile (ESSM), which has a maximum range of about 30 n miles.

Australia has handed over the third of four Guardian-class patrol boats built for the Maritime Eleme...
Request Consultation