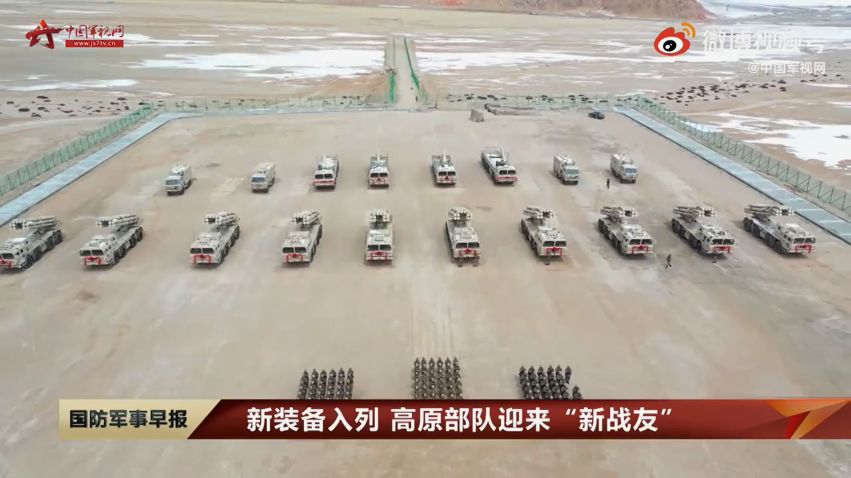 A screengrab from CCTV footage released on 8 May showing that 10 new PHL-03 MRLs, along with support vehicles, recently entered service with a unit under the PLAGF’s Xinjiang Military Command. (CCTV)

Broadcaster China Central Television (CCTV) released footage on 8 May showing these MRLs, along with support vehicles, being inducted in a ceremony held recently on a plateau at an undisclosed location at an altitude of 5,200 m above sea level.

The footage showed a formation of 10 launchers, each manned by a crew of four, accompanied by four transloaders and four unidentified 4×4 trucks, which were likely for carrying various spares or additional battery equipment.

Each of the MRLs, which are made by the China North Industries Group Corporation (Norinco) and based on a modified Wanshan WS2400 8×8 heavy-duty truck chassis, were shown fitted with 12 launch tubes for 300 mm artillery rockets.

The development took place after CCTV reported in October 2020 that the PLAGF’s Tibet Military Command had begun deploying what it claimed to be a new, longer range, and more accurate rocket with the PHL-03 MRL.

The new rocket, the range of which CCTV claims is 30 km greater than that of the standard rockets used by the system, was shown by the broadcaster at the time being fired by an artillery brigade during a high-altitude, live-fire exercise – presumably in Tibet – and accurately striking several small targets in quick succession.

Chinese state-owed media has revealed that an artillery brigade with the People’s Liberation Army Gr...