The Pakistan Aeronautical Complex (PAC) at Kamra rolled out on 30 December the final 14 of 26 dual-seat JF-17B Thunder multirole combat aircraft ordered by the Pakistan Air Force (PAF) in late 2017. 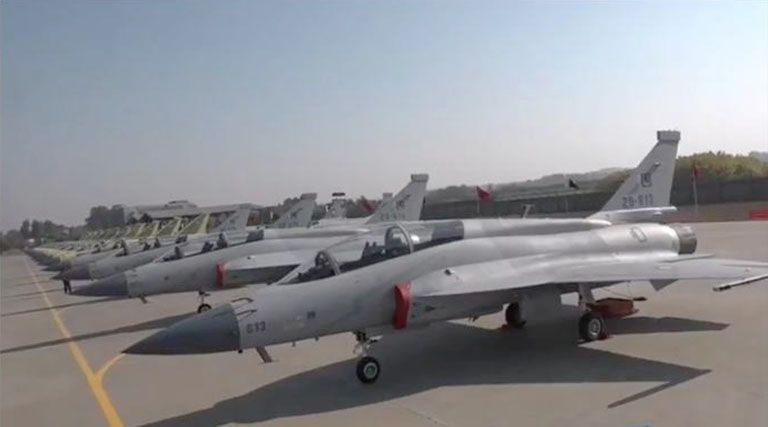 PAC Kamra rolled out the final 14 JF-17B fighter aircraft on order for the PAF in a ceremony held on 30 December at the company’s facility in Punjab. (Pakistan Air Force )

The move comes after the PAF received the first 12 JF-17Bs earlier this year. All 26 aircraft will be operated in both the operational conversion and tactical roles, either by working as part of the five frontline squadrons or under a new Operational Conversion Unit.

The PAF also announced on 30 December that PAC Kamra has officially launched production of the Block III variant of the JF-17, which was developed in collaboration with China’s Chengdu Aircraft Industry Group (CAIG) and made its maiden flight in December 2019 from the CAIG’s production facility at Chengdu-Huangtianba.

The new AESA radar will eventually be integrated into the 26 JF-17Bs and there is also the possibility of earlier-built Block I and Block II JF-17s being retrofitted with the KLJ-7A.

There are currently two CAIG-built Block III JF-17 aircraft being test-flown in China by both Chinese and Pakistani pilots.

The first PAC Kamra-built Block III JF-17 is expected to fly during the second half of 2021. There is a requirement for 50 Block III JF-17 aircraft over the next three years.