Footage released by broadcaster China Central Television (CCTV) showed several examples of the SPH being used during indirect live-fire drills at an undisclosed location near the coastline. CCTV noted that is the first time the unit has conducted such a long-range indirect-fire exercise. 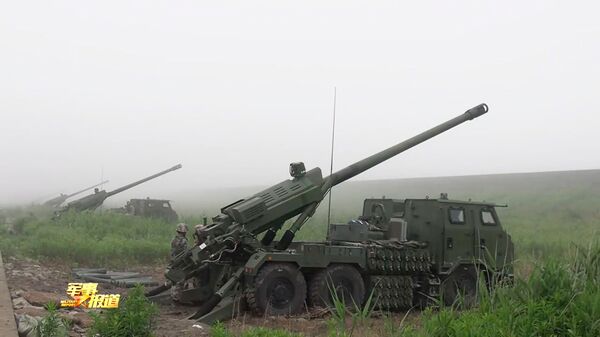 A screengrab from footage released by CCTV on 6 June showing an artillery brigade under the PLAGF's 71st Group Army using several PCL-181 SPHs in a live-fire drill at an undisclosed coastal area in China. (CCTV)

During the exercise the SPHs were set up behind a dam, and what appeared to be an ASN 209 Silver Eagle unmanned aerial vehicle (UAV) was launched for reconnaissance of the target area, which was reported to be on a hilly island off the coast.

The UAV fed targeting data to the central command post and the SPH battery carried out a number of fire missions against the target area over a 10-hour period in which they faced fog, rain, and night conditions.

The Global Times newspaper reported that during the first volley in the daytime, under fog and rain conditions, the artillery missed its targets. However, following adjustments the target area was successfully struck by the second volley. The drills eventually extended into night, and the troops carried out firing in dim light conditions. During this exercise the UAV is likely to have been a continuous presence above the target areas, feeding back information on targeting accuracy to the battery.