The previously undocumented type of missile found on two dhows carrying Iranian weapons to the Houthi rebels in Yemen are surface-to-air missiles (SAMs) that loiter in an area searching for a target, according to a US military official cited by the New York Times on 19 February. 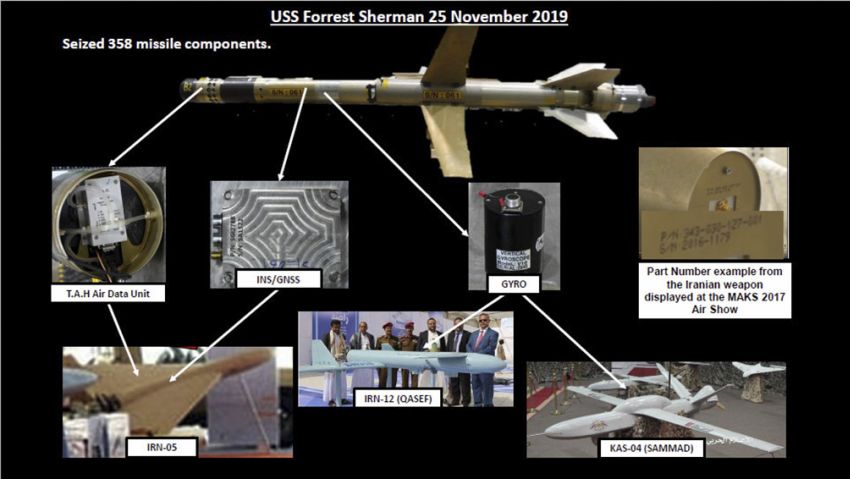 A slide from the CENTCOM briefing shows the components that the 358 surface-to-air missile shares with UAVs that are either made in Iran or with Iranian components. (US Central Command )

Examples of the missiles were found in weapon shipments seized when USS Normandy searched a dhow in the Arabian Sea on 9 February and USS Forrest Sherman searched another on 25 November 2019.

The missile’s existence was revealed by a UN Panel of Experts report released earlier in February, which detailed the Forrest Sherman seizure. It said it included two examples of a “previously not-documented cruise missile, possible for surface-to-air use”.

It released photographs showing a missile with an electro-optical sensor and what appeared to be an optical proximity fuze that would be appropriate for engaging aircraft. It had a solid-propellant booster that drops away after the air-breathing engine is brought up to speed. Together with its non-swept wings, this indicated it is a long-range subsonic weapon that would be ineffective against fast aircraft.

The military official told the New York Times that, after the booster drops off, the missile flies in a figure-of-eight pattern looking for targets and could be a threat to helicopters or V-22 Osprey tiltrotor transport aircraft.

The previously undocumented type of missile found on two dhows carrying Iranian weapons to the Houth...