Published on the ministry's website, the brief announcement said the service aims to acquire an initial 18 aircraft, adding that the request for bids will close on 22 September.

No further details were provided, but industry sources told Janes that the RMAF wants eight of these platforms to be primarily configured for lead-in-fighter training, while the remaining 10 would be LCAs. 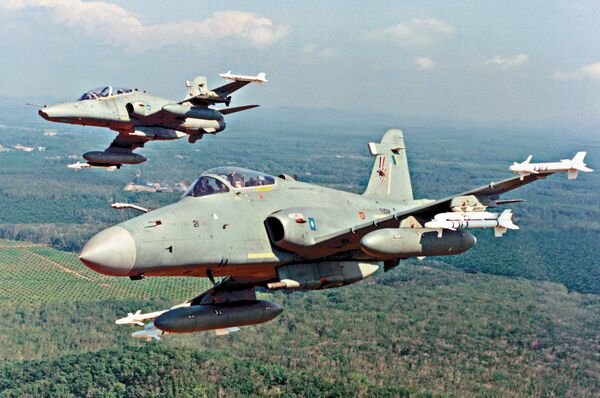 A file image showing a RMAF Hawk Mk 208 in the foreground and a Hawk Mk 108 in the background. Malaysia's MinDef announced on 22 June that it has issued a tender for the procurement of 18 LCA/FLIT aircraft that are also aimed to replace the service's ageing Hawk aircraft. (BAE Systems)

The programme is part of the RMAF's ‘Capability 55' plan. Launched in 2018 the plan calls for the procurement of 36 LCA/FLIT platforms in two phases, with 18 aircraft set to be purchased from 2021 and the rest from 2025. The 36 aircraft are intended to equip one LIFT and two LCA squadrons.

The FLITs are meant to replace the service's currently grounded fleet of seven Aermacchi MB-339CM jet trainers, while the LCAs will replace the 18 BAE Systems Hawk Mk 108 twin-seat and Mk 208 single-seat LCAs in service.

Malaysia's Ministry of Defence (MinDef) announced on 22 June that it has launched a tender for the R...