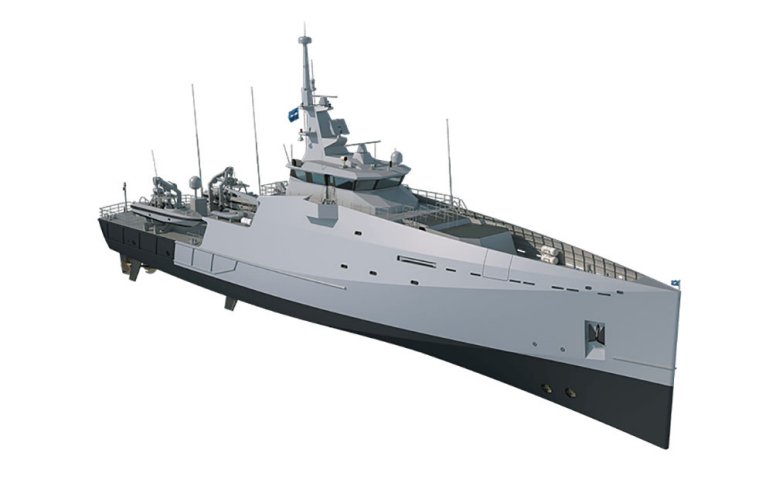 A computer-generated image of Damen’s Stan Patrol 6211 concept. The Royal Malaysian Navy is considering a 68 m variant of this concept, known as the Stan Patrol 6811, as a contender for the Littoral Mission Ship Batch 2 project. (Damen)

Multiple industry sources close to the process have confirmed with Janes that the service is currently evaluating proposals from four stand-alone shipbuilders, and a joint venture between Malaysian company Destini, and Netherlands-based shipbuilder, Damen.

Meanwhile, the proposal that has been forwarded by the joint venture between Damen and Destini is an 83 m vessel that is very similar to the OPV ordered for the Malaysian Maritime Enforcement Agency (MMEA), a contract for which was announced in January 2017.

The proposal from Swiftships has an overall beam of 11.3 m, and is powered by four MTU engines. It can be equipped with a 40 mm cannon in the primary position.

The design that has been submitted by Damen is a 68 m variant of the Stan Patrol 6211 concept. The OPV can similarly by equipped with a 40 mm naval gun in the ‘A’ position, and 12.7 mm machine guns for point defence.

The Royal Malaysian Navy (RMN) has begun an initial process to evaluate possible vessel types for it...

The Royal Malaysian Navy (RMN) has confirmed its procurement priorities for the next five years whil...