South Korean companies LIG Nex1 and Hanwha Systems have showcased models of the close-in weapon systems (CIWSs) each of them is proposing to meet the Republic of Korea Navy's (RoKN's) ‘CIWS-II' requirement.

Under the programme the RoKN aims to acquire a locally developed CIWS for use on its future warships, including the service's light aircraft carrier, KDDX guided-missile destroyers, and FFX-III-class guided-missile frigates. Janes understands that South Korea is aiming to complete development of the system by December 2030 for about KRW320 billion (USD287 million), with Seoul formally opening the bidding process for the project in May. 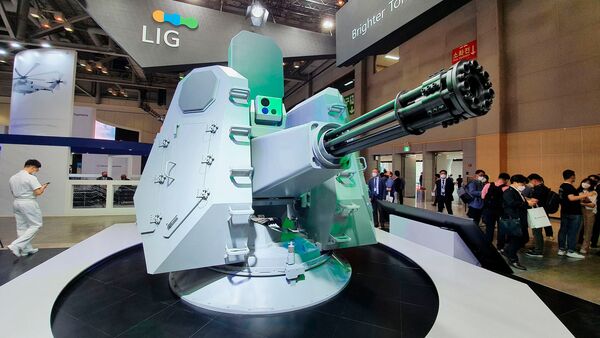 A model of LIG Nex1's CIWS proposal for the RoKN's ‘CIWS-II' project as displayed during the 9–12 June MADEX 2021 exhibition in Busan. (Dae Young Kim)

While the radars will be locally designed and built, the weapon is not likely to be a locally developed one but rather the same GAU‐8/A Avenger seven-barreled autocannon used by the Goalkeeper CIWS, which is already in service with the RoKN.

Hanwha Systems displayed a CIWS model with a more stealthy design but with similar radar and EOTS features. It seems the Hanwha design would also employ the same GAU‐8/A Avenger seven-barreled autocannon.

It is possible that these firms will team up with foreign companies, such as Thales or Raytheon, to secure the development contract.