DSME showcased a 1:125 scale model of its proposal for the RoKN's ‘CV eXperimental' (CVX) project that features a twin-island arrangement but no ‘ski jump' ramp. The model displayed reflects the design that has been seen in promotional material released by the RoKN since January. 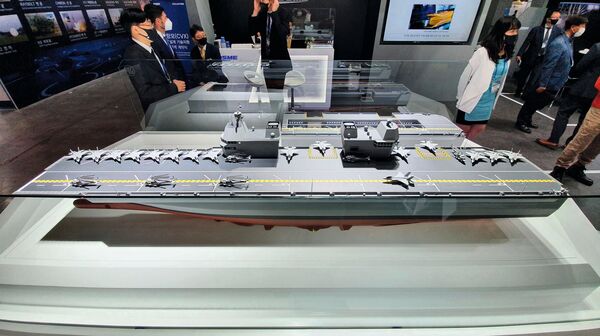 According to the company, the proposed carrier would be 263 m long, 46.6 m wide, and have a displacement of 45,000 tons and a top speed of 27 kt. It would be capable of carrying up to 16 short take-off and vertical landing (STOVL) fighter aircraft, such as the Lockheed Martin F-35B Joint Strike Fighter, on its flight deck and 12 more in its hangar.

Meanwhile, HHI displayed a 1:400 scale model of its proposed carrier, which would be 270 m long and 60 m wide. The design also features a twin-island arrangement but comes with an optional ‘ski-jump' configuration. The model, which is also configured with a well deck, features an area at the stern, below the level of the flight deck, for operating rotary unmanned aerial vehicles (UAVs).

According to HHI, the carrier would have a full-load displacement of 45,000 tons and be capable of carrying a maximum of 16 F-35Bs on its flight deck and a further eight in its hangar.