The Kuwaiti Air Force's (KAF's) Ahmed al-Jaber Air Base is to undergo a significant upgrade to accommodate its new Boeing F/A-18E/F Super Hornet multirole aircraft as well as its existing F/A-18C/D Hornets, according to plans for the project. 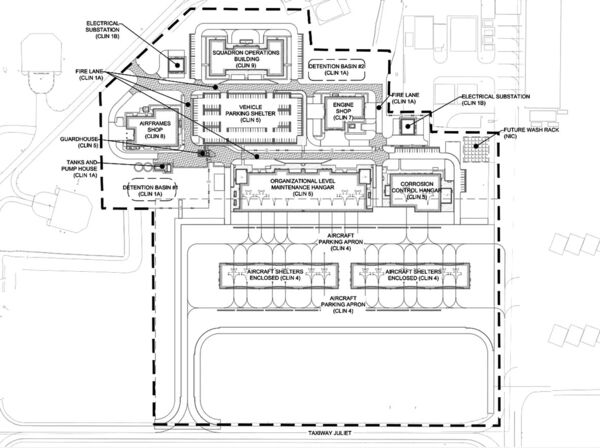 Released by the US Army Corps of Engineers on 20 July as part of a solicitation for a contractor to carry out part of the work, the architectural drawings show most of the new infrastructure will be built next to the aprons currently used by the KAF's Hornets.

A new apron with shelters for 12 aircraft will be built over an existing one that satellite imagery shows has been used by foreign C-130 transport aircraft in recent years. This will connect with a maintenance hangar that can accommodate eight aircraft and a corrosion control hangar for two. A new squadron operations building, engines shop, and airframes shop will also be built nearby.

The solicitation said the contract is estimated to be worth USD25–100 million, is expected to be awarded on 31 December 2021, and must be completed 562 calendar days later.

The Kuwaiti Air Force's (KAF's) Ahmed al-Jaber Air Base is to undergo a significant upgrade to accom...