Kazakhstan to receive additional Su-30SM fighters by end of 2022

The Kazakhstan Air Defence Forces (KADF) will receive four Sukhoi Su-30SM ‘Flanker-H' multirole fighter aircraft from Russia by the end of 2022, the Director of Russia's Federal Service for Military-Technical Cooperation, Dmitry Shugayev, was quoted by Russia's TASS news agency as saying on 25 August.

Shugayev noted that 20 Su-30SMs have been delivered to the KADF so far, adding that the latest batch of aircraft to be delivered next year is part of an ongoing contract. 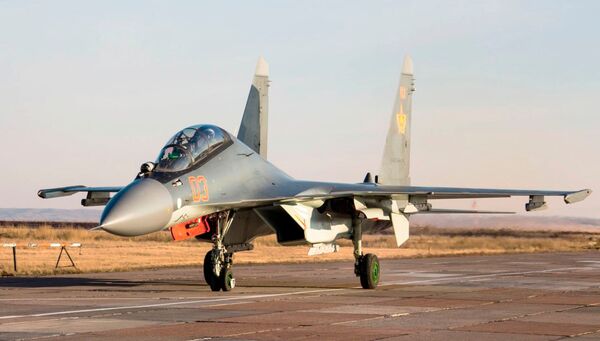 The KADF is set to receive four more Su-30SMs (similar to this one) by late 2022 to complete its second squadron of this aircraft type, Dmitry Shugayev, the director of Russia's Federal Service for Military-Technical Cooperation, told TASS on 25 August. (Kazakh MoD)

Janes understands that these four aircraft will complete the KADF's second squadron of 12 Su-30SMs.

The Kazakh government first expressed its intention to buy a second squadron of Su-30SMs in August 2017 as part of a framework agreement signed with Russia. However, Nur-Sultan placed an order for just eight of these aircraft during the KADEX defence exhibition held in May 2018. Shugayev's announcement confirms that the remaining four aircraft to complete the KADF's second Su-30SM squadron are now also on order.

Based on Shugayev's remarks, Janes understands that all eight aircraft ordered in 2018 are now in KADF service, with the latest four aircraft being those handed over to the 610th Air Base in Karaganda in November 2020. At the time, the Kazakh Ministry of Defence (MoD) did not reveal how many aircraft had been delivered.

Overall, Kazakhstan is believed to be planning to acquire three squadrons of Su-30SMs totalling 36 aircraft. However, no recent reports have emerged about negotiations to acquire a third Su-30SM squadron.