South Korean aerospace and defence company Korea Aerospace Industries (KAI) has revealed that it plans to roll out the first prototype of its Korean Fighter eXperimental (KF-X) multirole fighter aircraft in April 2021.

In the latest edition of its monthly Fly Together magazine the company released an image showing the prototype’s fuselage, which was assembled at KAI’s facilities in Sacheon. No further details were provided about the programme but Janes understands that the prototype is expected to conduct its first flight in 2022. 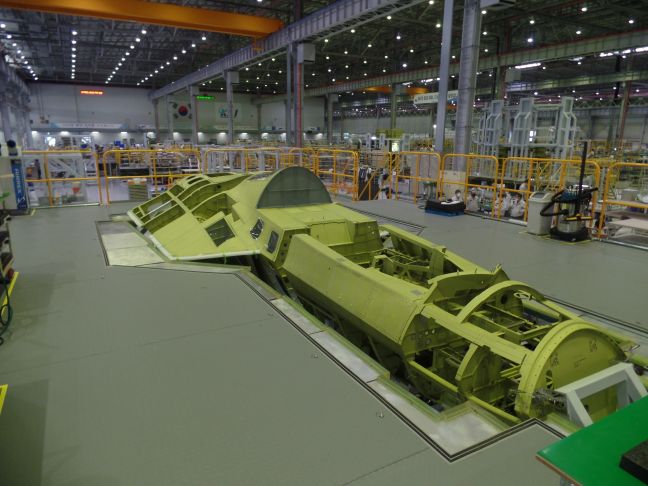 An image showing the fuselage of the first KF-X prototype at KAI’s assembly facility in Sacheon. The company has revealed that it plans to roll out the first protype aircraft in April 2021. (KAI)

The performance of the KF-X, which is on order for the Republic of Korea Air Force (RoKAF), is expected to improve with each ‘Block’, with the development programme envisaging the production of six Block 0 prototypes, followed by four years of trials and the completion of development by mid-2026.

The first mass-produced KF-X aircraft, which will be part of Block 1, are expected between 2026 and 2028. They will be equipped with limited air-to-ground weapons in addition to air-to-air weapons.

On the other hand the Block 2 KF-Xs, which will be series-produced from 2029, will be capable of performing full air-to-air and air-to-ground combat missions.

Meanwhile, officials from South Korea’s Defense Acquisition Program Administration (DAPA) told Janes on 6 July that the country’s Agency for Defense Development (ADD), in co-operation with Hanwha Systems, is expecting to complete development of an active electronically scanned array (AESA) radar for the KF-X by mid-August.