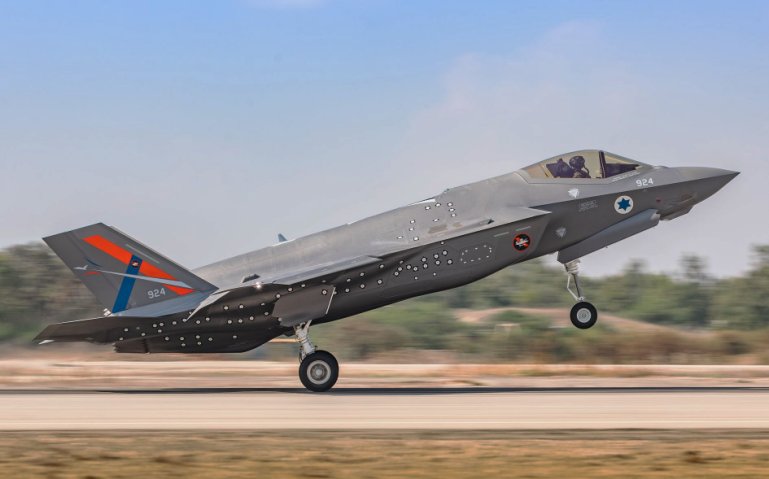 The Israeli Air Force hailed the arrival of the F-35I testbed at Tel-Nof Airbase as greatly enriching the service’s independence in improving its division of fifth-generation aircraft. (Israeli Air Force)

The arrival, announced by the Israeli Air Force (IAF) on 11 November, saw the first non-US based testbed F-35I fly into the IAF Flight Testing Center (FTC) at Tel-Nof Airbase, south of Tel Aviv.

“[This event] marks the start of a new era in the IAF FTC Squadron – for the first time in 14 years, a first-of-its-kind fighter jet equipped with advanced experimenting capabilities will land at the squadron,” the service said. “The arriving ‘Adir’, designated for flight experiments, will greatly enrich the IAF’s independence in improving its division of fifth-generation aircraft.” Brigadier General Oded Cohen, Commander of Tel-Nof Airbase, added, “With the new addition of the ‘Adir’ to the lines of experimental aircraft in the IAF’s FTC Squadron, we are witnessing a historic event, the magnitude of which cannot be underestimated – a meaningful cornerstone in the IAF’s inauguration and development of the F-35 division. To the FTC Squadron personnel, the absorption of the ‘Adir’ poses new challenges. I have no doubt […] you will know […] how to challenge the limits of the ‘Adir’s’ capabilities, and lead the IAF through toward new horizons.”

Israel has received a Lockheed Martin F-35I ‘Adir’ combat aircraft to be used for in-country develop...