Iraq's Popular Mobilisation Forces (PMF) displayed unmanned aerial vehicles (UAVs) during the parade they held on 26 June to mark their seventh anniversary, but did not show them in media coverage in a possible attempt to downplay links to Iran and recent attacks on US bases. 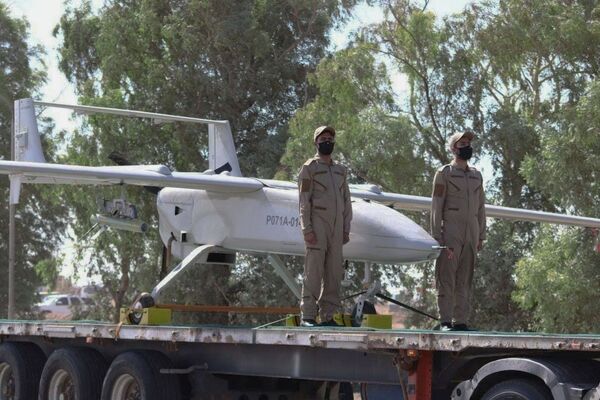 The parade was reportedly originally scheduled to be held in Baghdad earlier in June, but was delayed and then moved to Camp Ashraf, a base in the east of Diyala governorate, for unclear reasons. It was attended by Prime Minister Mustafa al-Kadhimi.

Photographs emerged from the parade showing Mohajer-6 – one of Iran's latest UAV models – that was carried on a truck and armed with guided munitions. This could not be seen in the 83-minute video of the event that the PMF released via its YouTube channel.

Photographs and amateur video of the event also showed the Mohajer-6 was preceded by various other types of UAVs carried on pickup trucks. Two examples of a type with a wheeled undercarriage were shown that did not match a known model but looked like a cross between Iran's Ababil-3 and Karman-12.

Another type was similar to the Samad family used by the Iranian-backed Yemeni group Ansar Allah (Houthis), although is not known to be in service with Iranian military forces. It can be used to carry out reconnaissance or to carry a warhead into a target. It does not have wheeled undercarriage, instead using skids to land. The Iranian-backed group Hizbullah displays a similar type at its museum in Mleeta, southern Lebanon.