The Islamic Republic of Iran Navy (IRIN) commissioned its largest vessel on 13 January in the form of IRINS Makran (441), a tanker converted into a multipurpose naval vessel. 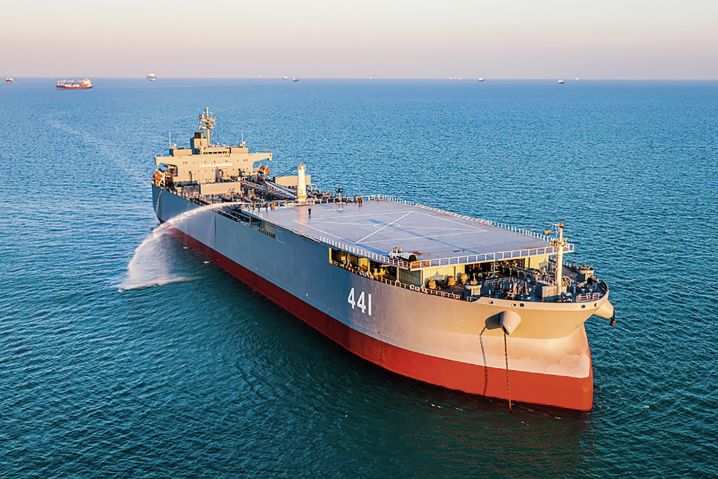 The converted tanker Makran became the IRIN’s largest ship when it was commissioned on 13 January. (Fars News Agency)

Photographs of the ship show that it has been fitted with a large flight deck raised up on shipping containers, although it lacks a hangar. Its crane can launch small boats, at least four of which can be stored next to the flight deck.

It has been fitted with 20 mm and twin 23 mm anti-aircraft guns in six raised emplacements, and a 12.7 mm heavy machine gun on each of its bridge wings. It was shown with what appeared to be a land-based anti-ship missile launcher under camouflage netting on its flight deck.

It has two surface-search radars and what appears to be an antenna for electronic support measures. It also has two large ISO containers mounted on platforms on the deck that might represent a modular payload that could include containerised missile launchers.

Satellite imagery shows a tanker of that length moored at a berth on the breakwater of Bandar Abbas harbour from July 2019 to August 2020: a slot previously used by the IRIN’s replenishment ship Kharg (431). It was then moved up the Gulf coast to a dry dock at the Iran Shipbuilding and Offshore Industries Complex (ISOICO) for modification, and was back in the water sometime between 3 and 8 December.

The Islamic Republic of Iran Navy (IRIN) commissioned its largest vessel on 13 January in the form o...