Iran now has armed versions of its Ababil-3 unmanned aerial vehicle (UAV), it was revealed during an 18 April ceremony held to mark the delivery of three types of unmanned aircraft to the military.

An Ababil-3 is seen carrying a Ghaem guided bomb. Two Karrars can be seen behind. (Iranian Ministry of Defence and Armed Forces Logistics)

The Ministry of Defence and Armed Forces Logistics released photographs showing a hangar at the Aerospace Industries Organisation facility in Isfahan with 11 Ababil-3s, one of which was carrying a television-guided munition on a hardpoint under a wing. This appeared to be a member of the Ghaem family of small-guided bombs that has previously been seen on Mohajer-6 UAVs.

Iranian television showed an Ababil-3 with a different livery apparently carrying out a precision air strike against an old tank using a munition labelled as a Ghaem.

The MODAFL cited Defence Minister Amir Hatami as saying the Ababil-3 has a range of 150 km.

The two other types of unmanned aircraft were identified as the Karrar and the ‘multi-role jet’.

Resembling an aerial target drone, the Karrar has been displayed before and is supposedly capable of carrying and releasing a standard aircraft bomb over a target. Two were displayed carrying bombs during the ceremony, with at least one labelled as a Karrar-3. 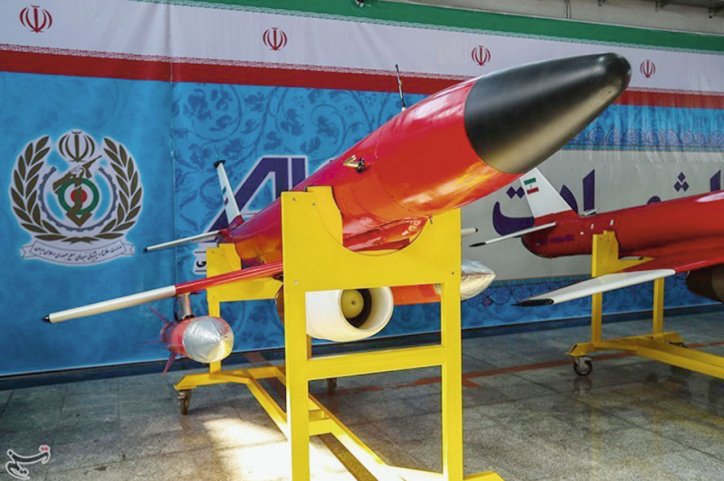 One of the turbojet-powered target drones was displayed with payloads under both wings. (Tasnim News Agency)

The multi-role jet aircraft also resembled a target drone, albeit with its engine mounted below its fuselage rather than above it, as with the Karrar. One of the 10 aircraft displayed during the ceremony had payloads mounted under its wings.

Iran now has armed versions of its Ababil-3 unmanned aerial vehicle (UAV), it was revealed during an...