The certification was signed and submitted after the completion of a series of activities, including document verification, conformity inspection, as well as static and dynamic tests carried out by the Indonesian Military Airworthiness Authority (IMAA) feasibility team, the MoD said in a statement. 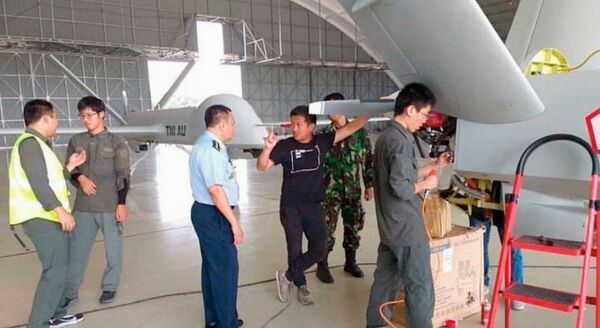 Two TNI-AU CH-4 UAVs being prepared for a parade to mark the 74th anniversary of the Indonesian Armed Forces. The MoD in Jakarta announced on 25 August that the service's four CH-4s have been granted military airworthiness certification. (TNI-AU)

The TNI-AU currently has a fleet of six Chinese-built CH-4B MALE UAVs that were ordered in 2019. The first two UAVs made their public debut in October 2019 during the 74th anniversary parade of the Indonesian Armed Forces.

The CH-4 variant supplied to Indonesia has an operating radius of between 1,500 km and 2,000 km and can be operated via satellite link.

The UAVs had initially been used primarily for evaluation, training, and doctrine-building purposes. However, the delivery in April 2021 of a first batch of Chinese-made AR-2 air-to-surface precision-guided missiles to arm the CH-4Bs suggests an operational role for the MALE UAVs. The TNI-AU also test-fired the AR-1 missiles from its CH-4 UAVs in 2019.

Janes therefore understands that the recent military airworthiness certification is a further step to ensuring that all six CH-4Bs can be deployed operationally in the short term. The UAVs will serve with Squadron 51, which is based at the Supadio airbase in Pontianak, near West Kalimantan.