The Indonesian Ministry of Finance (MoF) has granted approval for the country to obtain up to USD700 million in foreign loans to procure two aerial tankers for the Indonesian Air Force (Tentara Nasional Indonesia Angkatan Udara: TNI-AU) in 2021.

This was revealed in a notice issued by the MoF on 26 April listing a total of 31 Ministry of Defence (MoD) programmes for which funding through foreign loans has been approved.

Issued after consultations with the MoD and the Ministry of National Development Planning (Kementerian Perencanaan Pembangunan Nasional: BAPPENAS), the list, which was initially classified, has been provided to Janes by a government source. The document also shows that a total of 56 requests for foreign funding were rejected.

Janes was first informed by a source at the Singapore Airshow 2018 that the TNI-AU had appointed GMF AeroAsia, a subsidiary of national carrier Garuda Indonesia, for assistance with an in-depth study on Indonesia's aerial refuelling capabilities. 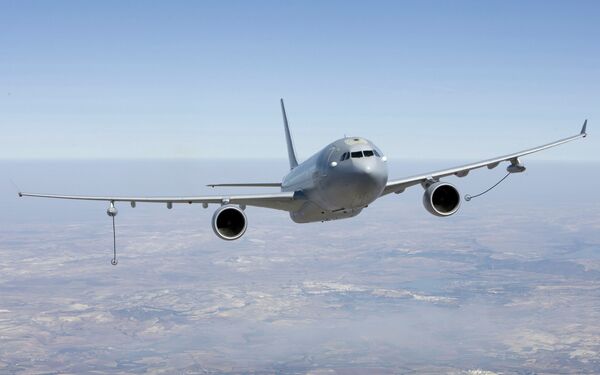 A Royal Australian Air Force KC-30A (A330) MRTT with its refuelling hoses out. Indonesia is also considering this aircraft type for its aerial refuelling requirements. (EADS)

Among the matters that were explored in the study were life cycle costs, local capabilities in maintaining the airframes, compatibility of refuelling methods with the TNI-AU's fleet of aircraft, and inter-operability with existing and future TNI-AU assets.

As part of its findings, the TNI-AU and GMF AeroAsia recommend that the new tankers be equipped with both the probe-and-drogue and flying boom aerial refuelling methods, Janes has learnt.

Prior to the joint study with GMF AeroAsia, the TNI-AU had conducted its own preliminary study comparing Airbus' A330 Multi Role Tanker Transport (MRTT), Boeing's KC-46A Pegasus, and Russia's four-engined Ilyushin Il-78.

The Indonesian Ministry of Finance (MoF) has granted approval for the country to obtain up to USD700...