The Indonesian government is aiming to establish a new holding firm, which will combine the capabilities of the country's state-owed defence industrial base, before the end of 2021.

The aim of the so-called ‘Defence Industry BUMN Holding' company is to promote collaboration across Indonesia's biggest defence firms in meeting the requirements of the Indonesian National Armed Forces (TNI).

Other priorities are to support increasing efforts to reduce military imports and stimulate industrial growth and jobs. 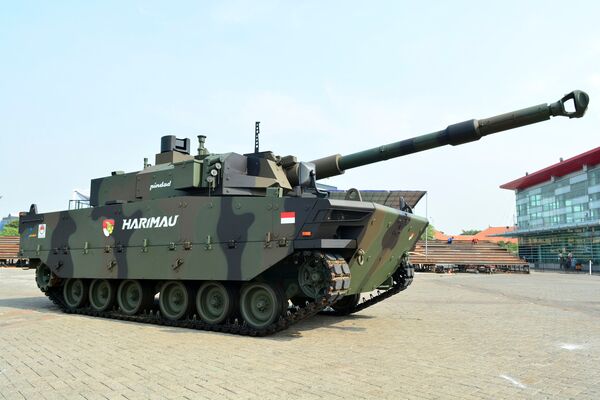 Indonesia has proposed a joint holding company that will oversee major state projects such as the production of the country's new Harimau medium tank (pictured). (Janes/Patrick Allen)

The holding company effort is being led by the Indonesian Ministry of State Owned Enterprises, also known as BUMN. Defence electronics specialist PT Len Industri, based in Bandung, has been nominated as the lead company in the new holding firm.

Pahala Mansury, deputy minister of BUMN, said in a recent online defence industry conference that the holding firm, once operational, will “provide benefits not only for the government and state-owed enterprises but also the defence ecosystem as a whole”.

Janes understands from an Indonesian industry source that the government aims to formally establish the holding company by the fourth quarter of 2021.

Janes also understands that the company will initially be focused on developing and providing capability across three industrial areas: land-based combat power including tanks; propulsion technologies; and cyber defence technologies.

Other priorities include naval shipbuilding and aerospace, especially fighter aircraft. In advanced areas, such as fighter aircraft, the emphasis of the holding company will be on the production support and the provision of maintenance, repair, and overhaul (MRO).

The Indonesian government is aiming to establish a new holding firm, which will combine the capabili...