India's government-run Defence Research and Development Organisation (DRDO) test-launched the latest variant of its Agni family of nuclear-capable ballistic missiles on 28 June off the coast of the eastern state of Odisha. 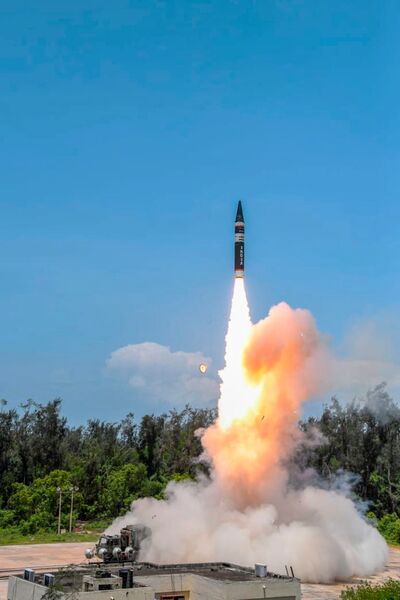 The DRDO test-launched a new Agni-class ballistic missile – designated Agni P – from Abdul Kalam Island off the coast of India's eastern state of Odisha on 28 June. (DRDO via PIB)

Named ‘Agni P' (Prime), the indigenously developed canisterised missile, which was launched from Abdul Kalam Island – formerly known as Wheeler Island – met “all mission objectives with a high level of accuracy”, said the Indian government's Press Information Bureau (PIB) in a statement, adding that the launch was tracked by various telemetry and radar stations.

The PIB described the Agni P as an “advanced variant of [the] Agni-class of missiles” with a range capability of between 1,000 km and 2,000 km. No further details were provided in the statement but official sources told Janes that the weapon is the first of a new generation of Agni-series medium-range ballistic missiles (MRBMs) to be tested by the DRDO following “extended development” over the past 2–3 years.

The missile, which is fitted with electro-mechanical actuators for guidance, is reported to have a circular error probable (CEP) of 10 m.

Military sources said that since the missile is canisterised, it is capable of being launched from a rail or road-mobile platform anywhere in India.