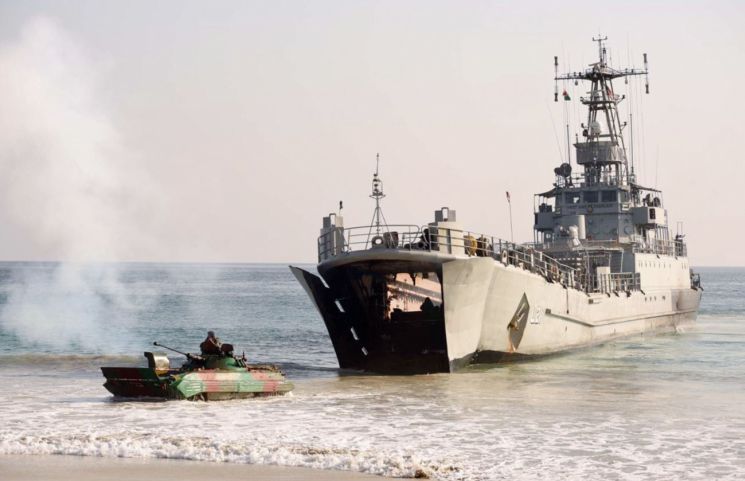 An amphibious assault exercise conducted by the Andaman and Nicobar Command in February 2021. (Ministry of Defence, India)

The Indian Armed Forces’ Andaman and Nicobar Command has held a demonstration of its amphibious assault capabilities, including with a new landing craft type that has been built specifically for the formation.

The demonstration was held on 28 February at a ‘multi-dimensional’ military exercise at Swaraj Deep, an Andaman Sea-facing island that lies about 50 km northeast of Port Blair.

“The demonstration highlighted the synergy, co-operation, and interoperability between the services towards achieving desired outcomes,” said the Indian Ministry of Defence in a statement on the exercise.

The ministry has stopped short of naming the naval and coastguard assets that were deployed at the exercise, but official images indicate the presence of at least two Mk IV landing craft utility (LCU) vessels, and the Polnochny D-class landing ship, Guldar (L 21).

The Mk IV LCU is one of eight vessels of the type that have been built for, and are being inducted into the Andaman and Nicobar Command. Besides troops, the vessel type has also been designed to embark armoured vehicles and other military equipment such as containerised mission modules. It is armed with two 30 mm CRN-91 naval guns manufactured by Ordnance Factory Medak, and 12.7 mm and 7.62 mm machine guns for point defence.

The Indian Armed Forces’ Andaman and Nicobar Command has held a demonstration of its amphibious assa...