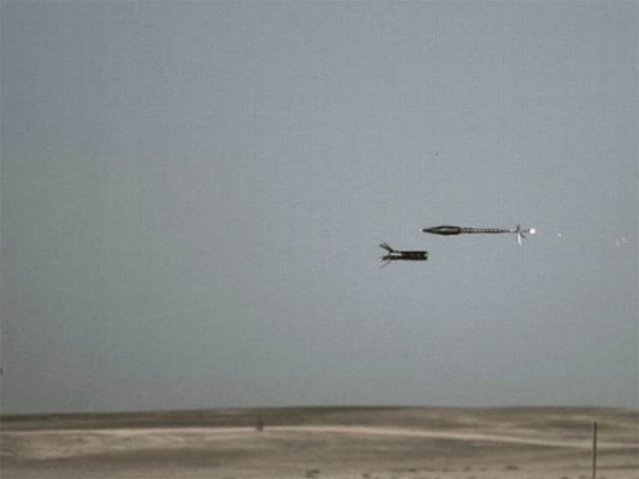 An image of the IFLD munition just before it intercepts an RPG. Elbit has not released any imagery of the IFLK defeating an APFSDS. (Elbit Systems)

The presentation included video footage of what Griffiths described as a “miss-to-kill” interceptor that was launched by the Iron Fist Light Kinetic (IFLK) system exploding near an APFSDS, thereby altering its trajectory. This would result in it hitting a vehicle fitted with the APS at a less-optimal angle, reducing the resulting penetration.

The development raises the prospect of armoured vehicles effectively defending themselves against main battle tanks as well as man-portable anti-tank weapons.

He did not explain how the two systems differ or say whether the IFLK interceptor requires a different launcher.

He said Iron Fist includes a solution to the problem of APS radar emissions giving away the location of vehicles but did not explain how this has been achieved.

The problem was touched on during a later presentation by Rheinmetall Protection Systems, which indicated that an APS with a 200 W-radar system could be detected from a range of 500 km by electronic intelligence assets.