Hudong-Zhonghua shipyard to relocate to Changxing Island near Shanghai

The second phase in the construction of a new shipyard that will result in the relocation of the China State Shipbuilding Corporation’s (CSSC’s) Hudong-Zhonghua yard from the Huangpu River in Shanghai commenced on 4 January, according to a CSSC post on the Weibo social media outlet. 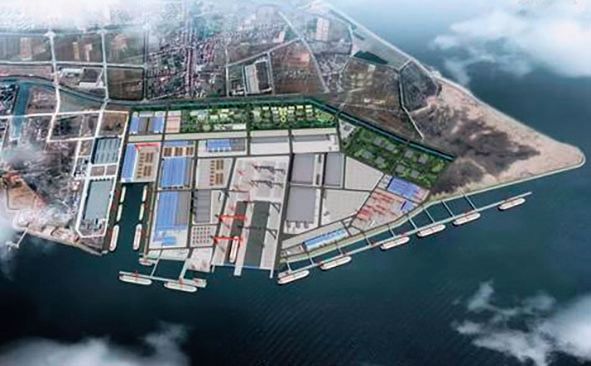 The site for the new shipyard is on Changxingdao (Changxing Island), adjacent to the Jiangnan shipyard where the PLAN’s first carrier configured for catapult-assisted take-off but arrested recovery (CATOBAR) aircraft operations is under construction, as well as Type 055 and Type 052D destroyers. The Jiangnan shipyard relocated to newly built facilities on Changxingdao in 2008/9 from a site in Shanghai on the Huangpu River, upstream of the current Hudong-Zhonghua shipyard.

At the new Hudong-Zhonghua site additional jetties were constructed around 2014, and existing ones extended, creating berthing facilities extending nearly 3,000 m, indicating that the relocation is part of a long-term plan. From a computer-generated image of the new facility, Phase 2 will include construction of two large graving docks, a fitting-out basin and the extensive covered facilities required by a shipbuilder engaged in advanced warship building.

The second phase in the construction of a new shipyard that will result in the relocation of the Chi...