As the fighting in Afghanistan intensifies, the Afghan Air Force's (AAF's) aircraft are being overtaxed owing to an increase in close air support operations as well as intelligence, surveillance, reconnaissance (ISR), and aerial resupply missions now that the Afghan National Defence and Security Forces (ANDSF) largely lack US air support.

In his latest quarterly report to the US Congress published on 29 July, US Special Inspector General for Afghanistan Reconstruction (SIGAR) John Sopko quoted the Train, Advise, and Assist Command-Air (TAAC-Air) under the ‘Resolute Support' mission as saying that all AAF airframes have been flying “at least 25% over their recommended scheduled-maintenance intervals”, noting that this is “exacerbating supply-chain issues and delaying scheduled maintenance and battle-damage repair”.

Although the report – which covers from 1 April to 30 June – provided no details about the number of daily sorties being flown by the AAF, the Afghan government claimed on 29 June that the service had carried out 491 attacks on Taliban positions within a month. 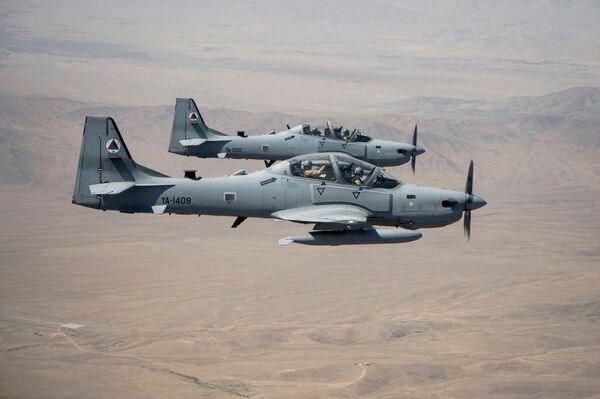 All of the AAF's aircraft, including its A-29 Super Tucanos, are being overtaxed owing to an increase in close air support operations as well as ISR and aerial resupply missions now that the ANDSF largely lack US air support, according to a 29 July report by the SIGAR. (USAF 438th Air Expeditionary Wing)

Meanwhile, crews remain “overtasked due to the security situation in Afghanistan” amid an increase in the tempo of operations, said TAAC-Air, according to the SIGAR. Moreover, once the US military mission in Afghanistan officially ends in late August, Afghan mechanics will be forced to operate with far fewer maintenance contractors who not only used to provide training and mentorship, but also could repair aircraft in emergencies.