Greek and Turkish warships collide in the Aegean Sea

A Greek and Turkish warship were involved in a minor collision during a standoff in the eastern Mediterranean on 12 August. 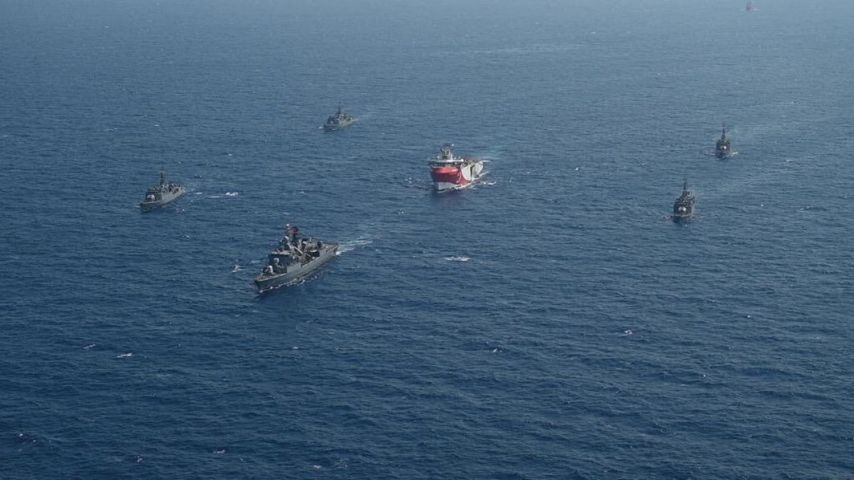 The Turkish survey vessel Oruç Reis is pictured being escorted by Turkish Navy vessels in the eastern Mediterranean on 10 August. (Ministry of National Defense/Anadolu Agency via Getty Images)

The incident occurred amid rising tensions between the two countries after Turkey dispatched a geological survey vessel, Oruç Reis, to chart an area claimed by both sides for possible hydrocarbon deposits accompanied by five Turkish warships.

When the expedition was first announced, the backlash from NATO, the EU, US, and the UK appeared to force a re-think in Ankara, only for the flotilla to re-start its mission on 10 August between Crete, Cyprus, and around the small isolated Greek island of Kastellorizo, which is 2 km off the Turkish coast but 125 km east of Rodos, the nearest Greek territory. During its excursions, Oruç Reis has been shadowed by several Greek frigates.

On 12 August, the Hellenic Navy’s 3,500-tonne Ellis-class frigate Limnos (F 451) reportedly made contact when its bow touched the stern of the Turkish 3,100-tonne Barbaros-class frigate TCG Kemalreis (F 247). Greek defence ministry officials described the incident as “an accidental mini-collision” that was caused by the Greek ship’s manoeuvre to avoid a head-on collision. Turkey, however, has described it as a “provocation”.

Although there were rumours and news reports of serious damage to one or both ships, causing a return to port, these have proved unfounded and both ships remain operational at sea. Following the incident, Limnos continued on its voyage to take part in a joint exercise with another Greek warship and two French Navy ships, while Oruç Reis’s mission is set to continue until 23 August.

A Greek and Turkish warship were involved in a minor collision during a standoff in the eastern Medi...