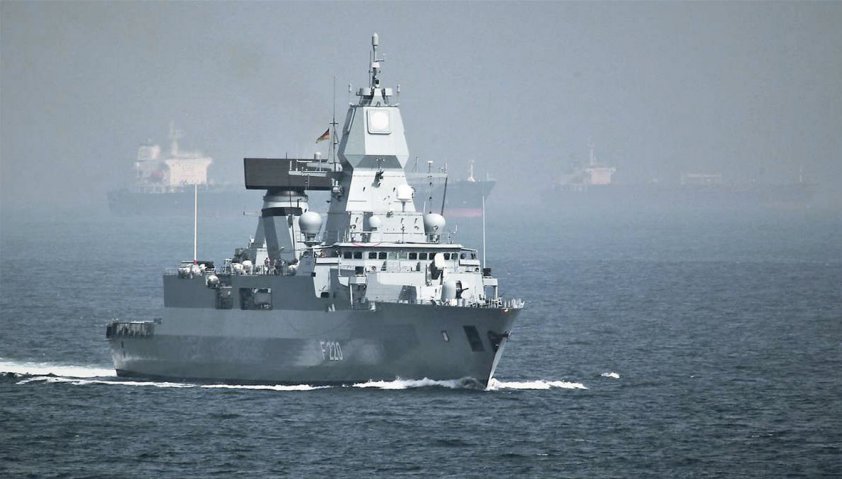 The German Navy frigate Hamburg off the West African coast in 2014. (Bundeswehr/Carsten Vennemann)

German Ministry of Defence spokesperson Christian Thiels told a government press conference in Berlin on 22 November that Hamburg conducted a co-operative boarding of the Turkish cargo ship Rosaline A about 200 km north of Benghazi with one of its helicopters, from which a boarding team roped onto the ship. The frigate has two Sea Lynx Mk88A helicopters and a boarding team from the German Navy’s Sea Battalion on board.

Roseline A left Yarimca in Turkey towards Misrata, Libya, according to a 23 November statement on EUNAVFOR MED’s Operation ‘Irini’ website.

The boarding team from the Hamburg began checking the Turkish vessel’s cargo with the full co-operation of its crew, according to Thiel, who said Turkey subsequently objected, after which the German boarding party left the ship and returned to the Hamburg without having found any banned cargo before the inspection was halted, and Rosaline A continued on to Libya.

At the same government press conference, German Foreign Ministry spokesperson Andrea Sasse added, “Naturally we take this incident very seriously. Regarding the [19 January 2020] Berlin Libya conference, we have repeatedly made it clear that we expect all participants in this conference to comply with the arms embargo on Libya, which is still in force. This naturally applies to Turkey.”

The US Naval Sea Systems Command (NAVSEA) has established a new team focused on preventing future in...