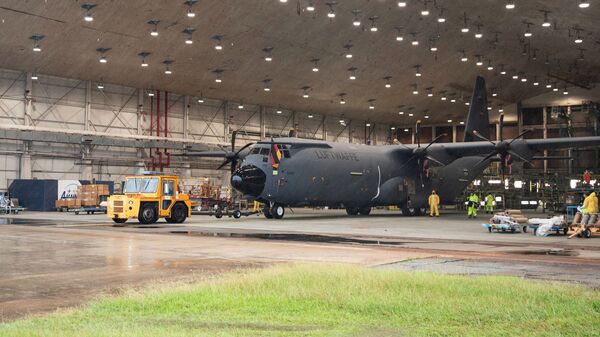 The Luftwaffe's first C-130J was rolled out of the Lockheed Martin plant in Marietta, Georgia, in mid-August. (Lockheed Martin/David L Key)

The squadron consists of four French Air Force (FAF) C-130Js – two transports and two KC-130J tankers – stationed at Air Base 123 at Orléans-Bricy pending their move to Évreux, to be joined by six Luftwaffe aircraft of the same type.

The Luftwaffe announced on its website on 28 August that its first C-130J had been rolled out at Lockheed Martin. The company told Janes on 2 September that the roll-out took place from its C-130 plant in Marietta, Georgia, in mid-August, with delivery planned no later than the beginning of 2022. Deliveries are scheduled to be completed in 2024, when the squadron is due to reach its full operational capability. Three of the German aircraft will be C-130Js and three KC-130Js.

The German MoD said that work on a binational tactical air transport fleet began in 2016 with the aim of increasing the interoperability of the Luftwaffe and FAF.

The ministry expected the squadron to reach an initial operational capability this autumn with the standing up of the squadron, which could conduct national missions but would first operate with mixed French and German crews. The squadron will be tasked with air transport and aerial-refuelling missions for the European Air Transport Command (EATC) in Eindhoven, the Netherlands.