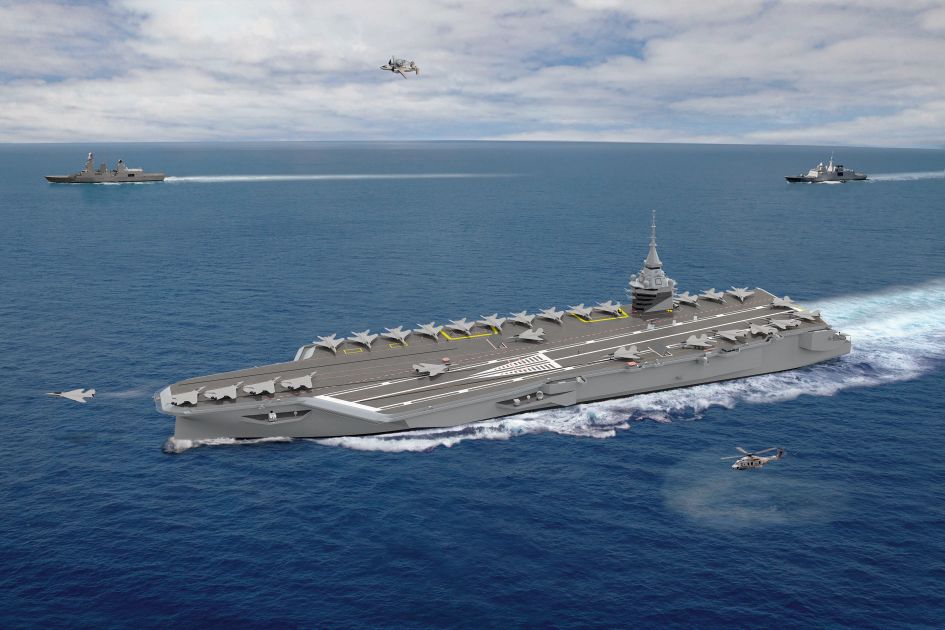 The PANG will have the capability to launch up to 60 fighter sorties a day. (Naval Group)

Assembly of the hull will be carried out in blocks at Chantiers de l'Atlantique in Saint-Nazaire, western France, between 2031 and 2034. The hull will then be fitted out in a basin between 2034 and 2036. A model of the hull is being tested in a lake in southern France after testing at an Armed Forces Ministry test centre in Val-de-Reuil, Normandy, where the United Kingdom also regularly carries out naval tests.

A naval Rafale M (Marine) will conduct tests with General Atomics’ Electromagnetic Aircraft Launch System (EMALS) in Lakehurst, New Jersey, before 2030. New Generation Fighter (NGF) tests will also be necessary when the aircraft is available. The PANG will have two or three EMALS.

The 70,000-tonne aircraft carrier will have the capability to launch up to 60 fighter sorties a day and have a week of ammunition for high-intensity operations. Five or six helicopters and two E-2D airborne early warning and control aircraft will also initially be involved in air operations. Unmanned aerial vehicles (UAVs) will be included at a later point as loyal wingmen to support NGFs, and the French Navy is also paying attention to US experiments with aerial-refuelling UAVs.

The crew will number 300 by 2033 and eventually 1,100. In addition, the PANG will accommodate 600 sailors of the air-naval group, 100 staff, and 200 reinforcements. Berthing compartments will accommodate no more than eight sailors each, compared with a maximum of 24 on the Charles de Gaulle aircraft carrier.