While many countries still deploy tracked self-propelled (SP) 155 mm artillery systems, there is a trend towards 155 mm wheeled artillery systems, as they offer strategic mobility due to less reliance upon heavy equipment transporters. 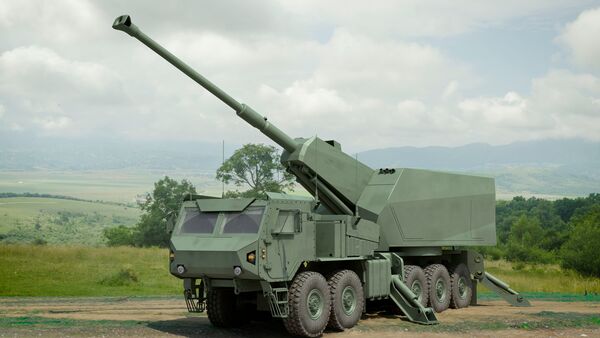 A rendering of the new SIGMA 155 mm/52 calibre self-propelled artillery system being developed by Elbit Systems for the Israel Defense Force, based on an Oshkosh Defense 10×10 platform. (Elbit Systems)

The new artillery system, called SIGMA, is being developed via an initial USD125 million contract announced in March 2019. It is based on a US-supplied Oshkosh Defense 10×10 platform selected by the IDF, which uses the trucks for a number of missions.

The platforms will be fitted with a fully protected control cab, a nuclear biological chemical (NBC) system, and full air conditioning for a crew of two or three.

Mounted on the rear of the chassis will be an automatic turret armed with a 155 mm/52 calibre barrel with a 23 litre chamber that meets the NATO Joint Ballistic Memorandum of Understanding (JBMoU), and is fitted with a muzzle brake and fume extractor.

The 155 mm/52 calibre turret system will be remote controlled from within. In addition, the system provides a manual reversionary mode, or “degraded mode” of operation, an Elbit Systems spokesperson told Janes.

The automatic loading system will set the fuze, load the projectile, and then the Uni-Modular Artillery Charge System (UMACS) with the primers will be automatically loaded via a separate magazine.